The term “sippet” has fallen out of modern culinary usage somewhat since its English-language introduction (as far as we can tell) in our Earth’s 1530s.

Its parent word, “sop”, originally meant any piece of bread that was used to soak up (or, as we still say, “sop up”) some liquid associated with food. Originally just a diminutive form of sop, gradually the use of the word “sippet” in a recipe started to imply that the bread involved had had something additional done to it. Eventually it came to mean any kind of bread, cut thin and fried or toasted, and then placed in a bowl or on a plate to have something fairly liquid—usually a stew, sometimes a soup—ladled over it.

This is how Segnbora comes across some sippets in Tales of the Five #2: The Landlady, where they appear as part of a casual lunch thrown together on her arrival at the farmstead of one of her House’s rural holder-families. The implication is that the sippets are there to help stretch one particular dish—the remainder of a roast chicken stew from the previous night.

The “leek bread” described in the text as being used to make the sippets was probably baked with this kind of use in mind, since the amount of leeks involved is enough to flavor the bread, but not so much as to dominate or upstage whatever dish it was being served with/under. At the same time, if there wasn’t a stew or soup in the immediate offing, it has enough flavor-personality to be interesting just as it stands, by the slice, with some butter or a soft green cheese.

For the egg wash for the loaf:

For the bread dough:  In a big bowl (or in a stand mixer, if you have a dough hook for it), combine the flour(s), the yeast, and the salt. Add the milk and oil, mix well together, and then knead for ten minutes or so (if by hand) or five to six minutes (with the machine). Warm and oil a big bowl for the dough to rise in. Put in the ball of dough, turn it so as to oil-coat all sides of it, and cover with a damp dishtowel or a sheet of plastic wrap/clingfilm. Put the dough aside to double in size—which will take between an hour and two hours, depending on whether you’ve used spelt flour. (The spelt may slow down the rise somewhat.)

While this is going on, make the filling. Chop up the leek(s)… 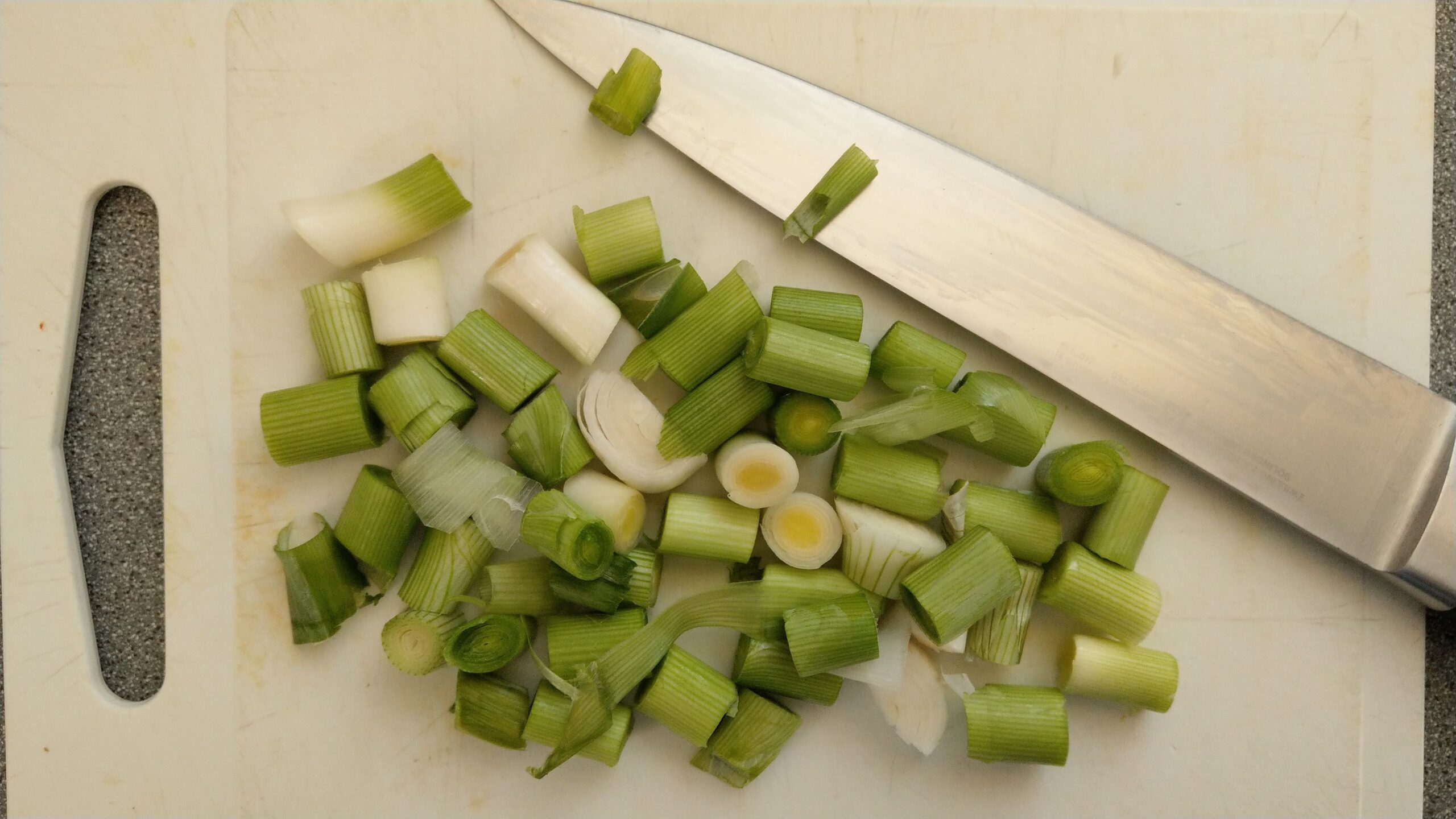 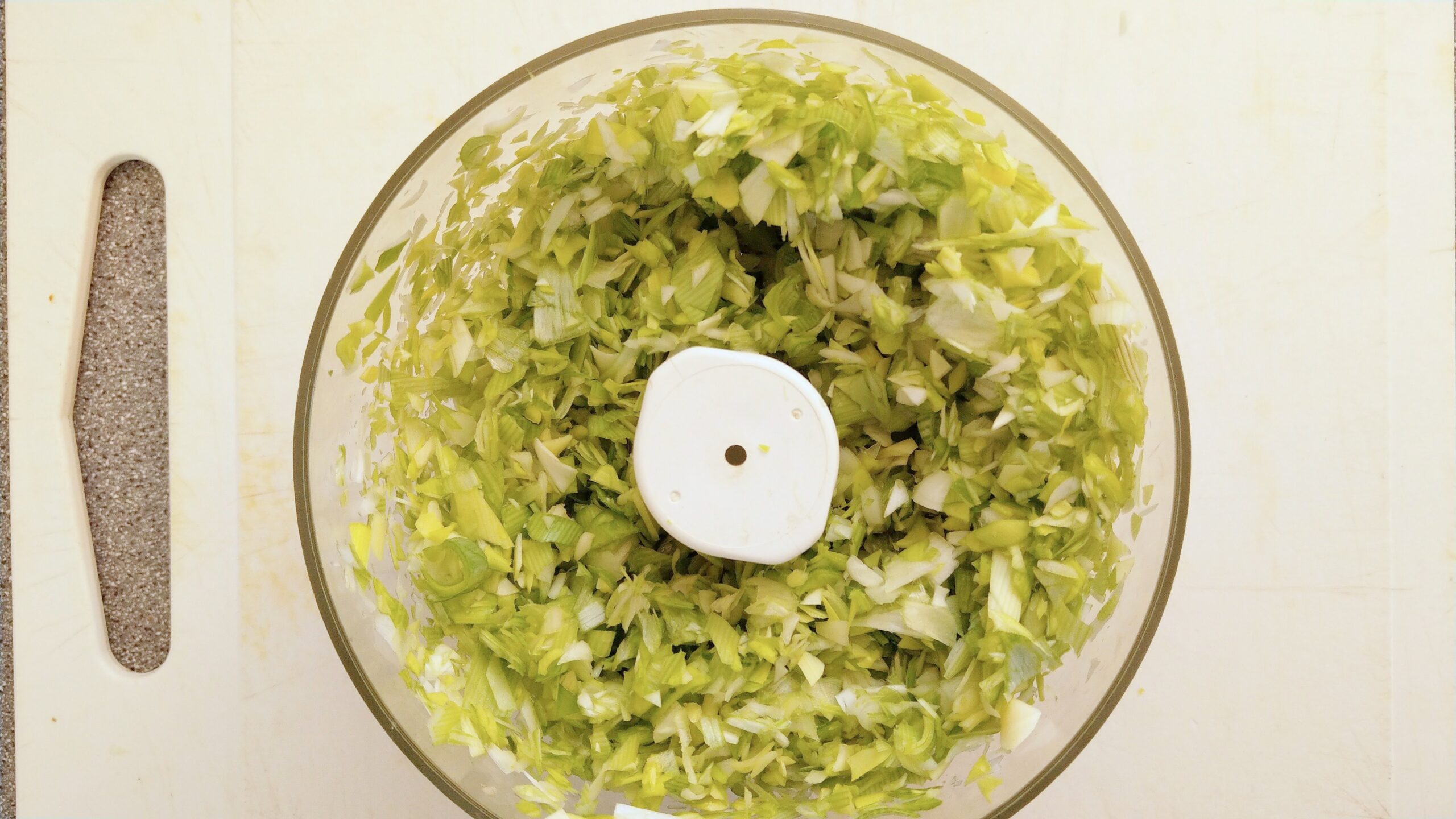 …Add the olive oil or butter to a frying pan, heat it to a low/moderate heat, and add the leeks, stirring them to distribute the fat. Add the nutmeg, allspice and salt and begin sweating the leeks down slowly until they’re darkening in color and/or starting to go translucent. 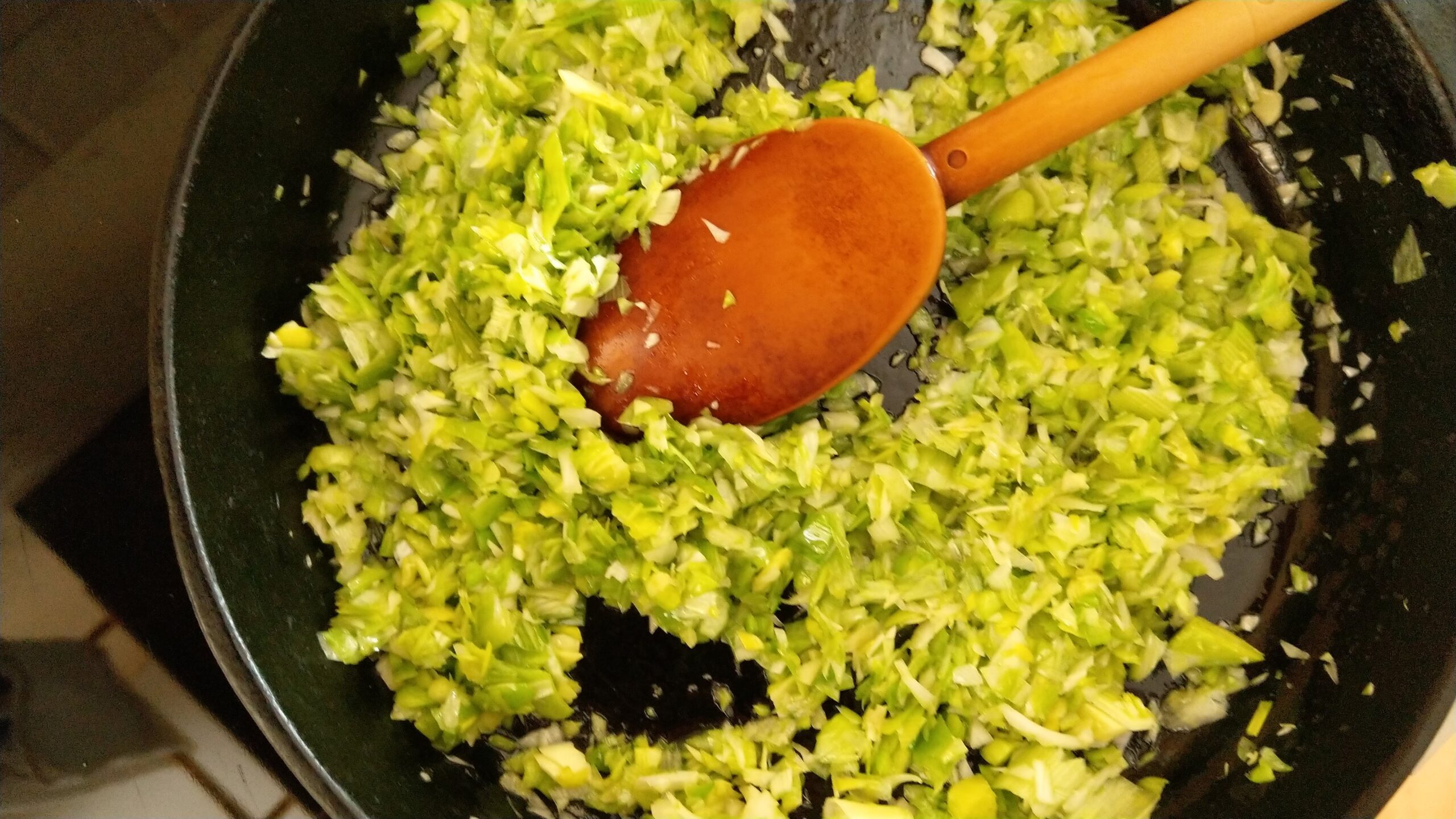 Meanwhile, chop the garlic up small… 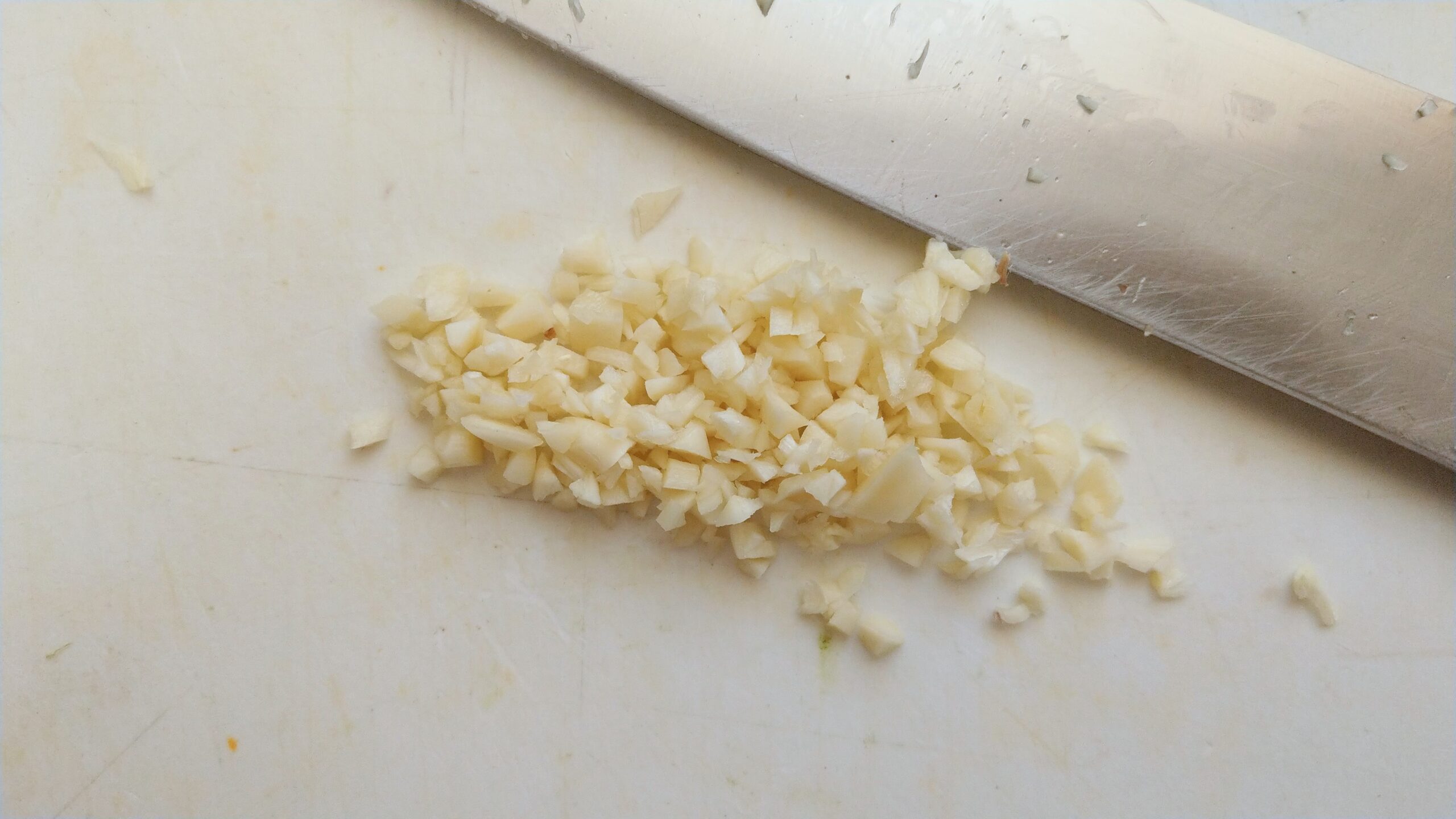 …and when the leeks are nearly done cooking, stir them in. Let them sizzle slowly with the leeks for another five minutes or so…

then remove the pan from the heat and let everything cool down.

When the dough has doubled, move it to a work surface, knead it gently for a minute or so, and roll it out into a rectangle the short dimension of which is about two-thirds the length of the pan you’ll be baking the bread in. 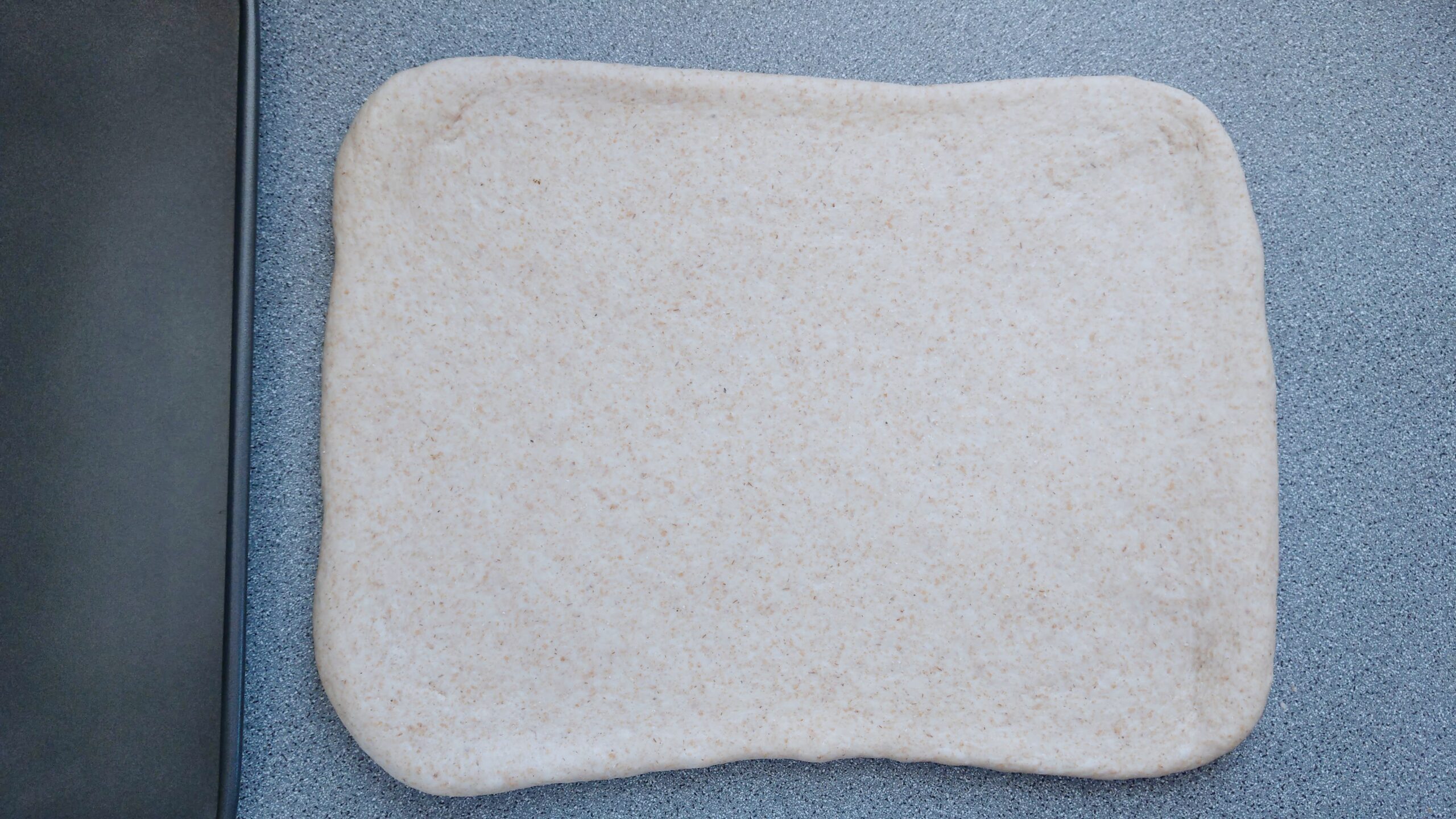 Once rolled out, spread the cooled filling on the dough, right up to one short edge (which will be the inside of the spiral of filling) and to about an inch or an inch and a half from the other end. 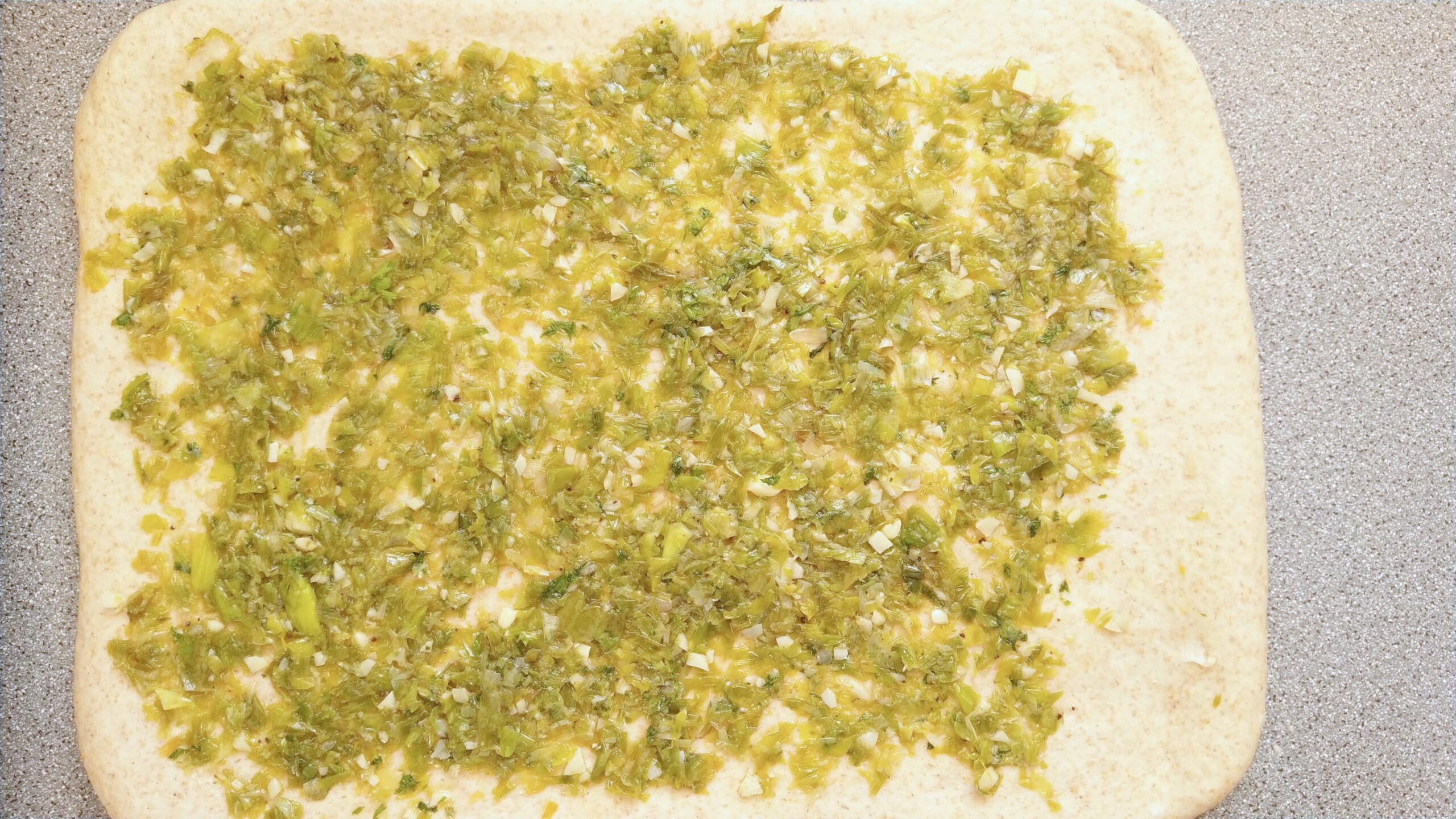 Then start rolling, or rather, folding, the inside of the bread-to-be toward the outside. 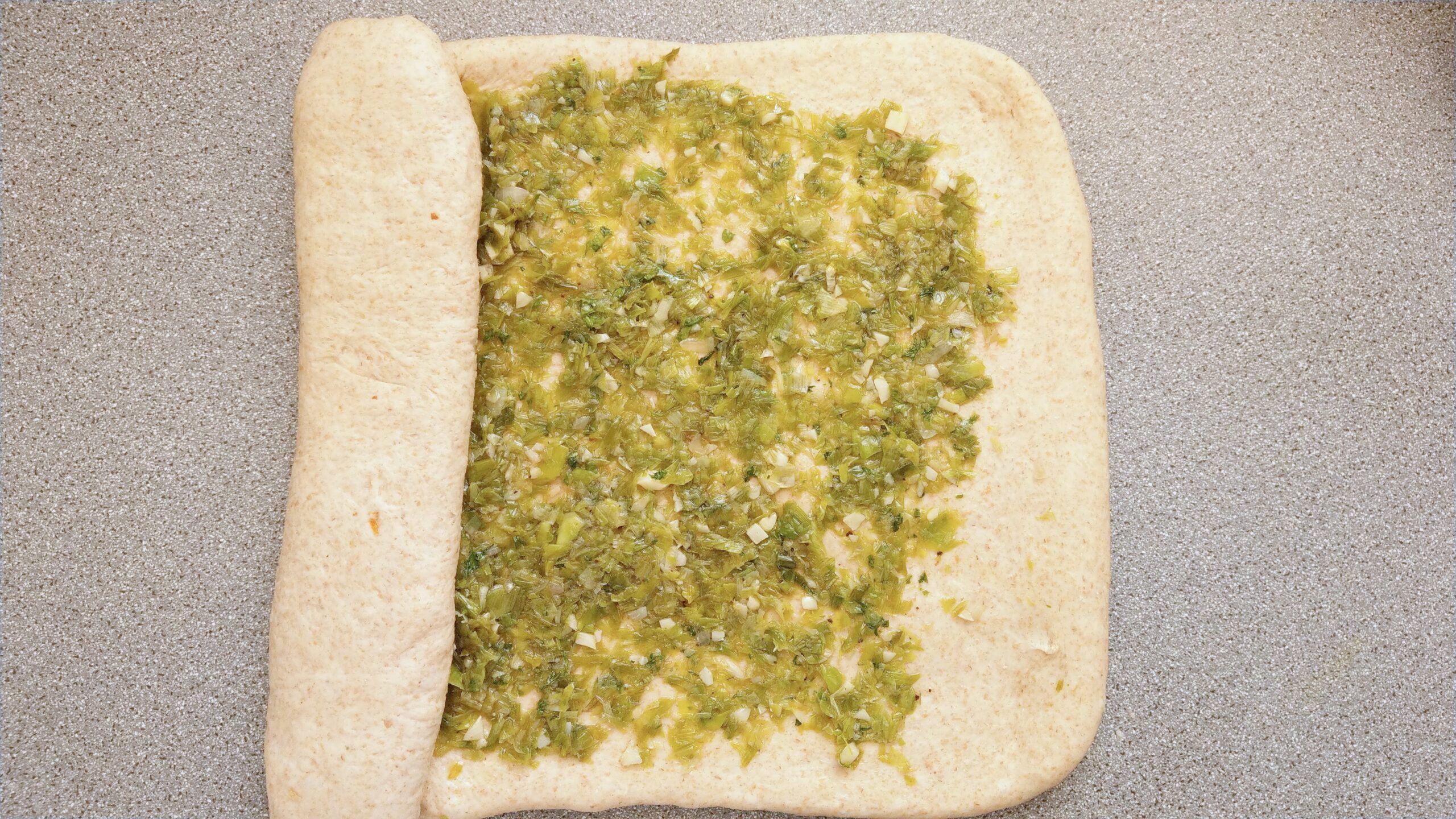 Each time you do a roll / fold, you want to press it down fairly firmly, to keep big gaps from opening up in the baked loaf later. 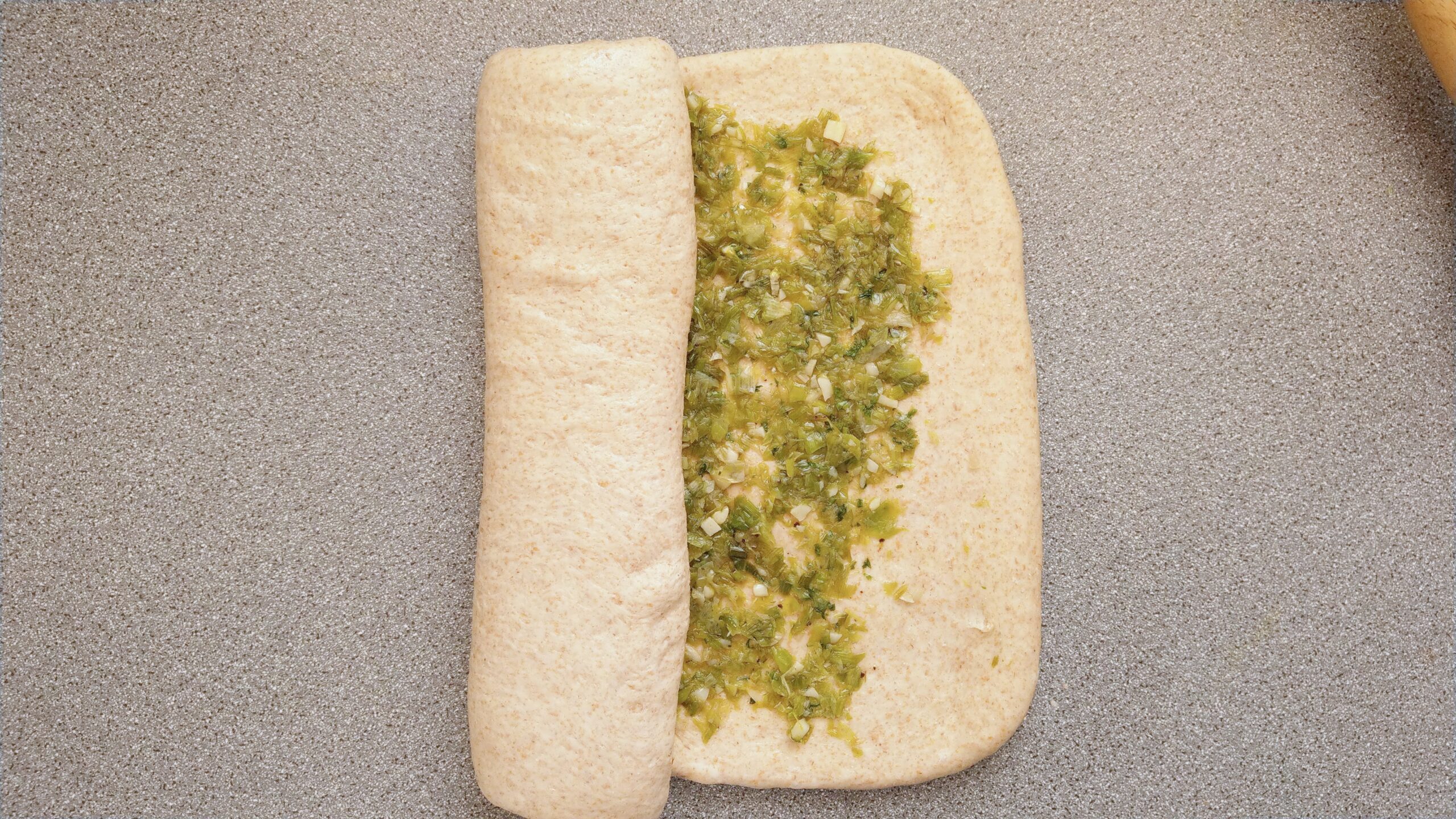 Keep doing this until the rolling is finished. 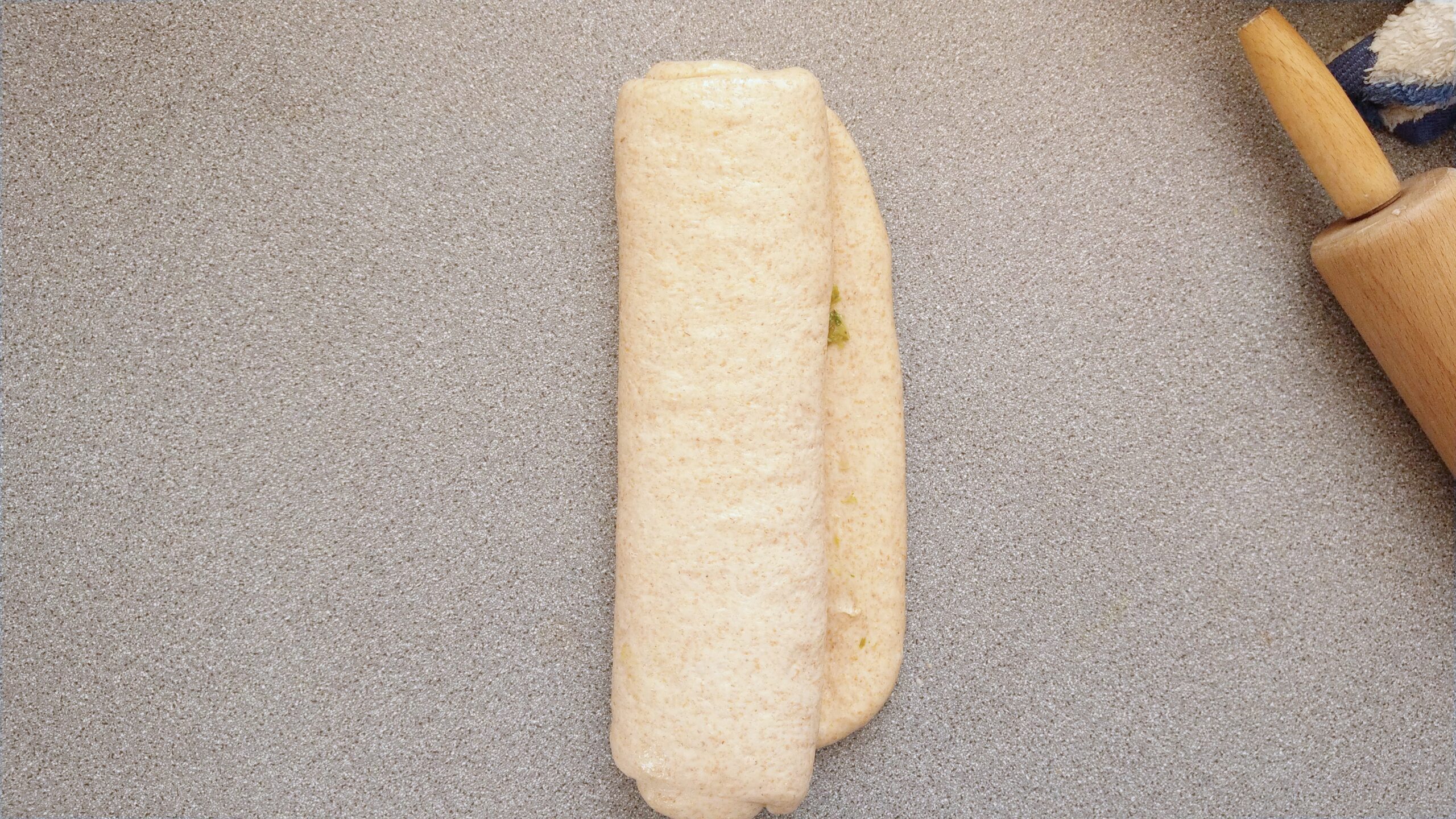 When you’ve finished the folding process, pinch together the soft dough of the body of the loaf and the folded-around end of it. Then carefully place this pinched side down on your baking sheet, and tuck the ends of the loaf under as best you can.

Brush a very small amount of oil over the top of the loaf (to keep it from getting too attached to the plastic wrap/clingfilm), lay a sheet of that over it (ideally the same one you covered the bowl of rising dough with), and then cover the whole business with a cloth and allow to rise again for 30-40 minutes. 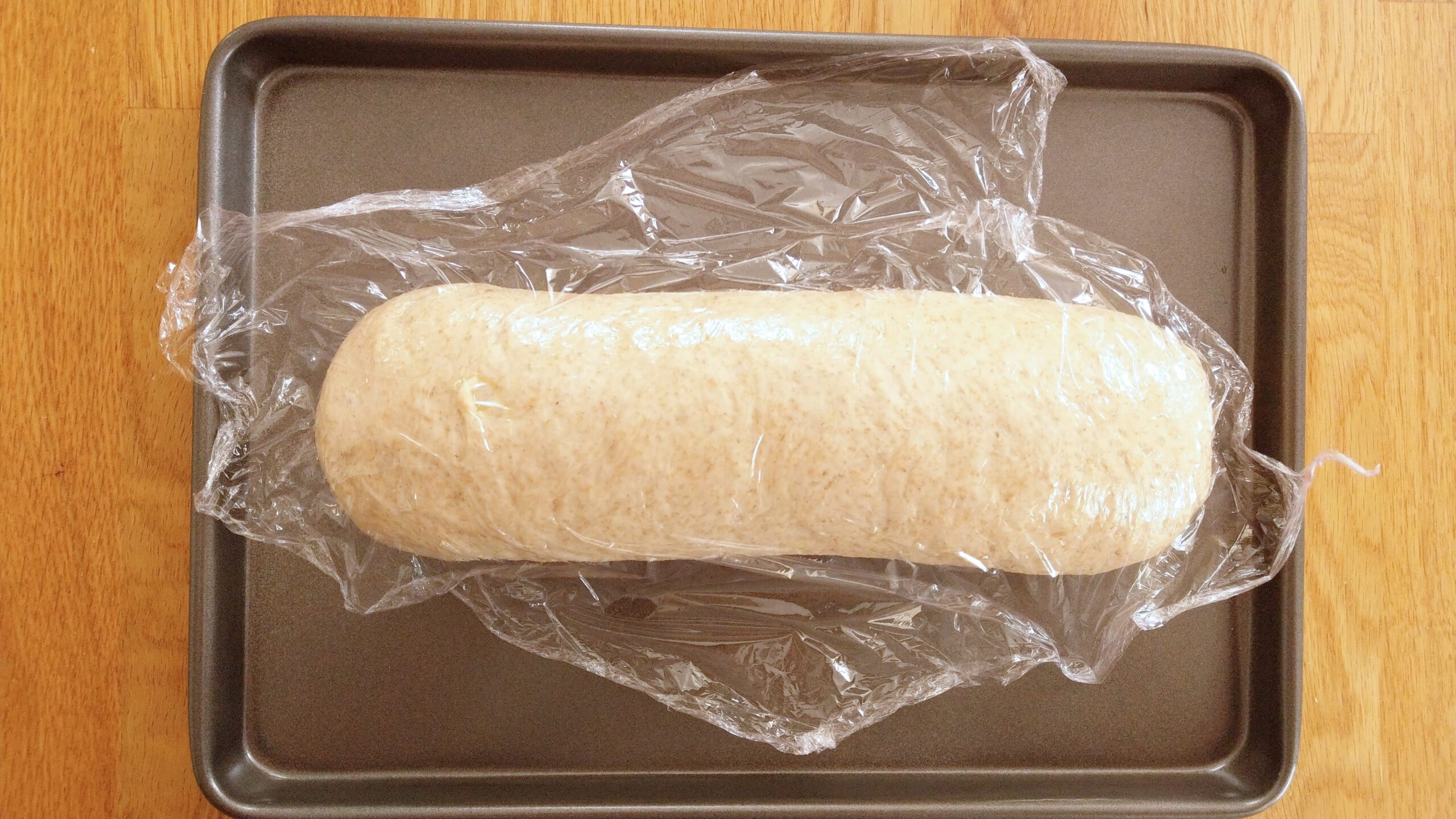 When the loaf is significantly bulked up (ideally doubled in size), preheat the oven to 200C / 400F (180C/375F if you have a fan/convection oven). Make the egg wash and brush the loaf with it.

Then, as soon as the oven is fully preheated, with a baker’s lame or very sharp knife, score the loaf four or five times, diagonally. Don’t go too deep when you’re doing this: just barely through the outermost layer is deep enough. 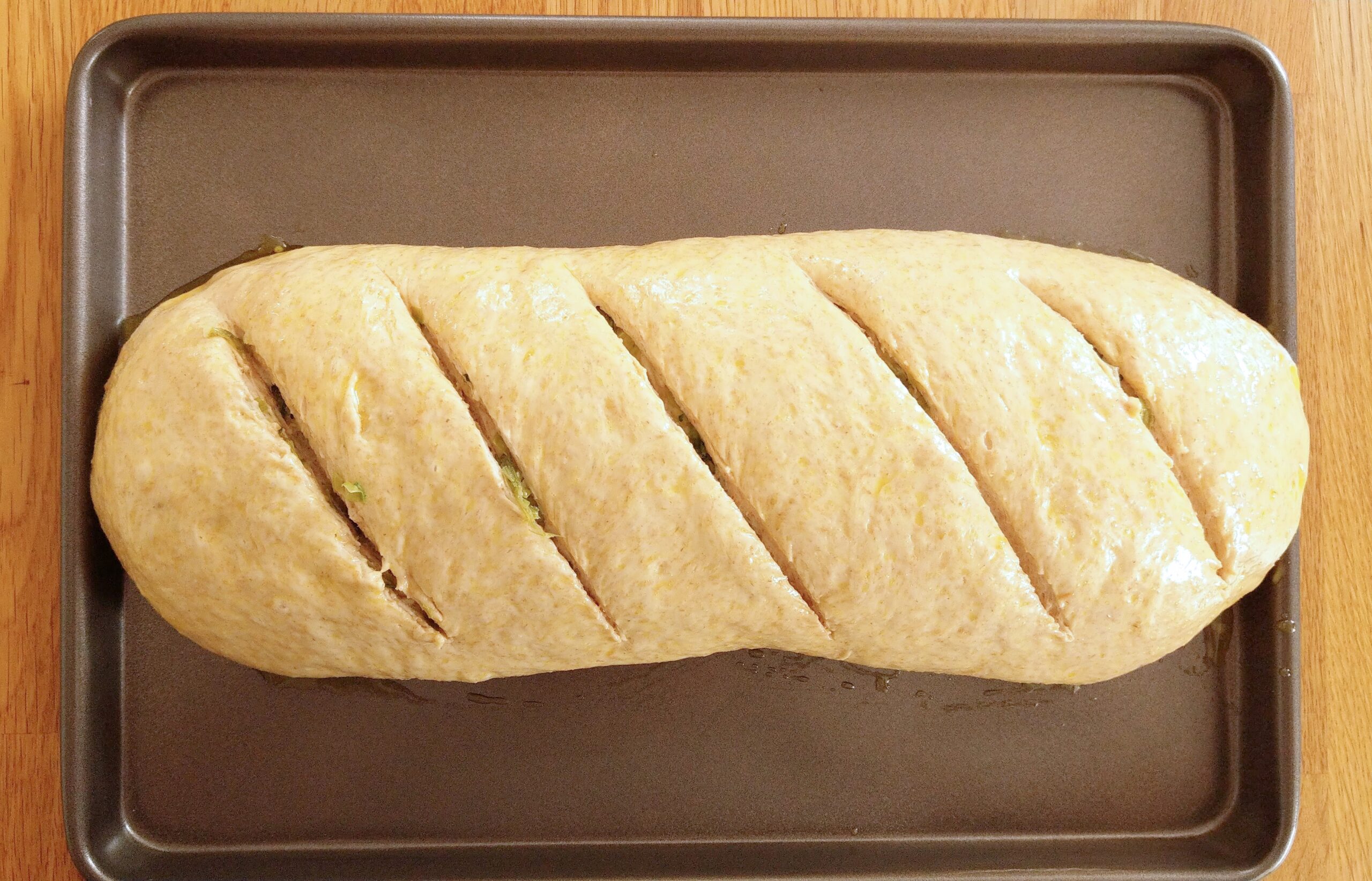 Then put the loaf immediately into the oven. After ten minutes, lower the oven temperature to 180C/375F, 160C/350F) and bake for 35-40 minutes. Remove to a rack and cool completely. 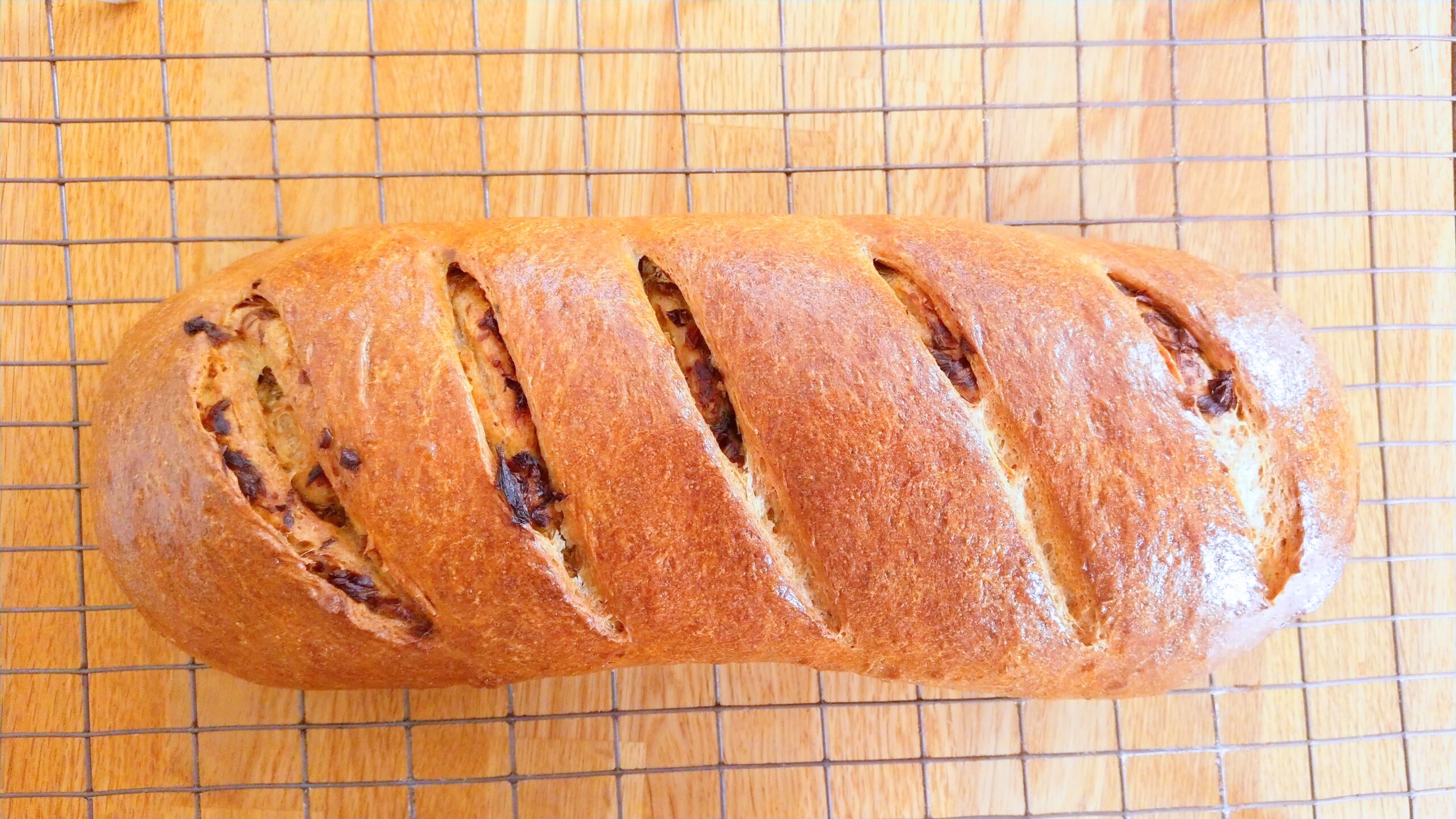 To use as sippets, slice the bread and either toast it under a grill or in the toaster, or fry on both sides in butter or the oil of your choice. Place in a bowl or on a plate, and spoon or ladle over the stew or soup of your choice. (This also works well with poached or fried eggs, as seen in the featured image.)

*Olea europaea, the “Mediterranean” olive tree, and numerous of its subspecies (most notably a dominant variant of Olea europea cuspidata) are present on the Kingdoms’ Earth and well known in the Four Realms; though they have a somewhat limited growth range, and beyond that area are valued almost exclusively for their oil rather than the olive fruit proper (which seems, further south, to be considered something of “an acquired taste”). O. europea cuspidata grows best and most extensively on the Darthene and North Arlene coasts near Síonan and Durhénded. Only the Southpeak dwarf oiltree, Olea chrysophylla medioregnis, is able to prosper south of the Great Road—mostly in the northern foothills of the Bluepeaks and Highpeaks, though also in the Steldene highlands south of the Waste.

Numerous other members of the Oleaceae are represented across the Realms… and, interestingly, the “national trees” of Arlen and Darthen, the whitestave and blackstave, are also members of genus Olea (Olea albavirga, Olea atricolor). However, their fruits’ unusually acrid flavor renders them and their oil inedible, so that the trees are prized primarily for their unique timber and their historical associations. (A particularly venerable specimen of O. albavirga—supposedly planted by Ealor Eagle’s-brother himself— is located in the near environs of the Brightwood’s Woodward, and is a favored resort of both tourists and residents of the area.) 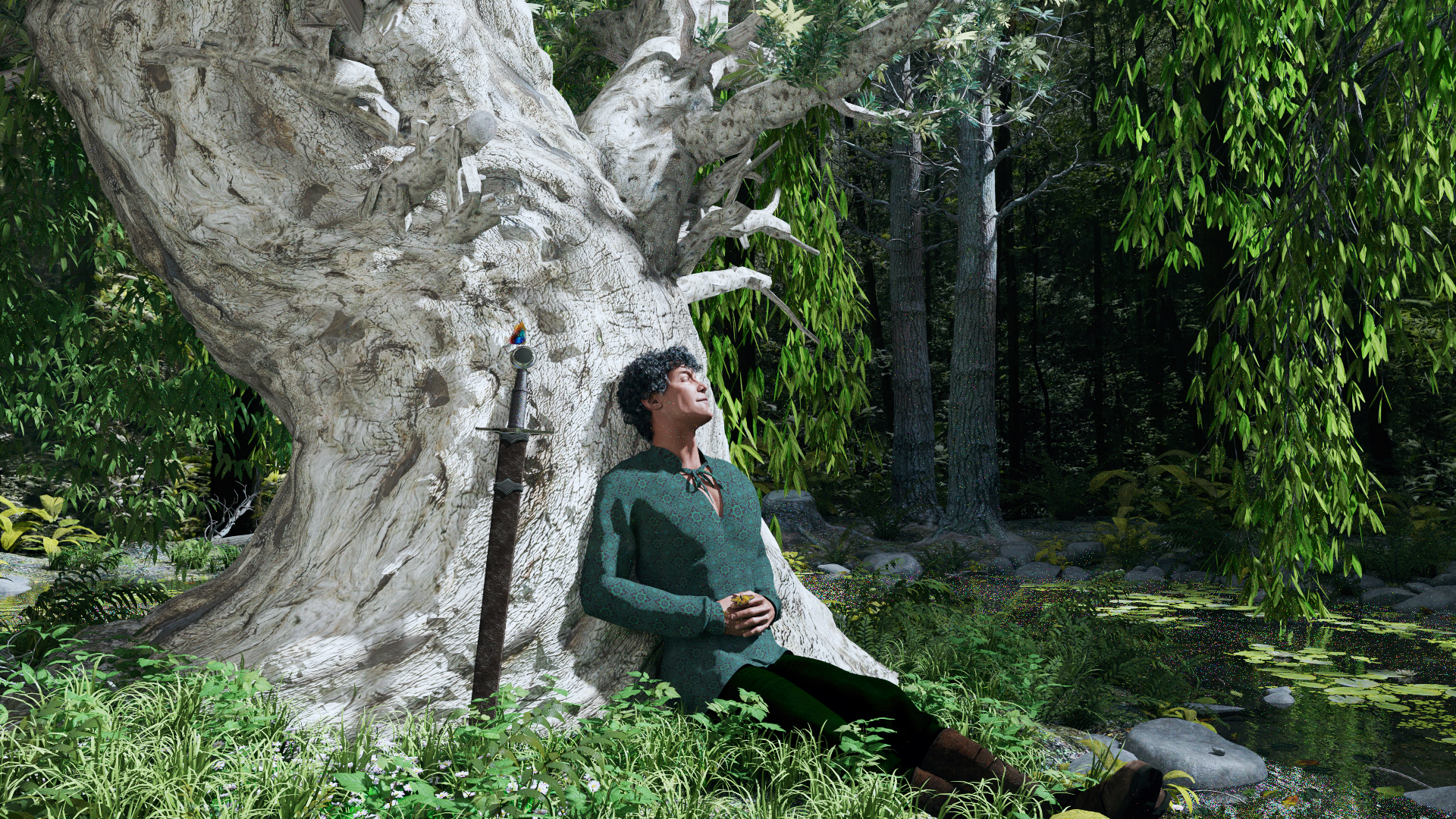