Apples in the Middle Kingdoms may be viewed either as a commonplace or a rarity, depending on where you’re located. In southern Steldin, Darthen and Arlen, you’re likely to run into them in all kinds of dishes, both sweet and savory, and of course (in season) eaten out of hand. In more northerly regions, though, a casual visitor to the markets from outside of the Kingdoms can routinely find apples to be surprisingly scarce, or ridiculously high-priced, or both.

Our own Earth’s complex network of supply chains and its food-storage technologies mean that many people in more industrialized regions tend to have access to apples all year round. But this wide availability also serves to mask the general inability of the Malus species to fruit successfully in areas with warm springtime weather.

In order to set its fruit correctly, an apple tree needs a certain number of “chill hours” each season—periods during which the temperature falls below 45°F/7°C. Most apples need between 500 and 1000 chill hours in the early season… so areas that qualify as what a US gardener would consider “zone 8” or warmer (see the map here) are out of luck when it comes to growing most of the better-known Earth apple varieties. And a significant portion of the Kingdoms—i.e., most of North Arlen, and almost all of the Arlene and Darthene “north country” bordering on the coast of the Sea—is more semitropical than temperate, and generally equivalent to zones 8 or 9. This means that for anyone living north of a line drawn roughly between Prydon and Darthis, apples are either a local rarity with a very limited season, or something that turns up in the market only at high prices secondary to their having to be transported from “up south” by road or river.

As a result, many kitcheners’ first thought on getting a supply of apples in—at least, after splurging on a fresh apple tart or two—is to work out how best to preserve the fruit for out-of-season use, and especially for the winter. Such storage methods as clamping or shed-based tray storage, which work well enough for whole vegetables, can be unreliable for whole fruit if the local climate turns unkind. As a result, most householders in the Kingdoms seem to prefer more aggressive approaches to preservation. Drying is popular due to its simplicity (and the means of drying itself can create surprising culinary possibilities: the smoked-apple dishes of Steldin are rightly renowned). Also popular—not least because the preservation technique turns the apple into a sweet with good keeping properties—is candying the apples in honey.

For most of us, the next question might be “What kind of honey?” But in the Middle Kingdoms the question becomes more complex, as it’s as likely to refer to the honey’s source as to any local varietal variations based on where the bees acquire their nectar and pollen.

On our Earth there are only a few species of bees that make honey—or more accurately, enough honey for humans to safely harvest without harming the colonies from which it’s obtained. One of these, and the one most kept for commecial uses, is Apis mellifera, the Western or European honey bee. However, the Kingdoms’ continent is shared with their version of A. mellifera by two other honey-making species.

Widespread in the cooler southern regions is a larger variant of the eastern- and southeast-Asian giant honey bee, Apis dorsata, which builds tremendous comb-filled nests in trees of the southern Darthene and Arlene oak and mountain-cedar forests, and on cliffs in the Steldene Southpeak foothills. (A. dorsata medioregnis, fortunately, does not share the blindly vicious temperament of its Earth-based congener, and intrepid forest-foragers are routinely able to acquire large amounts of surplus honey from bees whose favor they succeed in winning.) Meanwhile, in the semitropical northern regions, a variant of the stingless bee Tetragonula mellipes is widespread from the mouths of the Darst and the northern shorelands of the eastern Waste, right along the Darthene northern Seaboard and on both the eastern and western coasts of the North Arlene peninsula. Because of its higher water content and low glycemic index, this bee’s honey is runnier and less sweet-tasting than that of A. mellifera and A. dorsata, but also has a unique tangy/citrus flavor that’s much prized.

Because of that lower sugar content, though, T. mellipes’ honey doesn’t work so well for candying fruit. The recipe that follows therefore uses Apis-sourced honey of the type readily available in most Earth supermarkets.

The process is fairly straightforward. Apple slices are parboiled, drained, and then submerged in honey for at least two or three days. During this time, the concentration of sugars in the honey draws much of the water out of the fruit. The apple slices are then boiled in the resultant syrup until all excess water is driven off and the honey syrup is reduced to a thick glaze. If desired (and if there’s availability, since “sweetsand” can be hard to find in some parts of the Kingdoms), the fruit is rolled in granular sugar; then it’s spread out to continue drying in a slow oven. Finally, when dry, the apple slices are stored in a cool airy place until wanted.

Core and peel the apples and cut them into thickish slices. (Aiming for six slices per apple works well.) 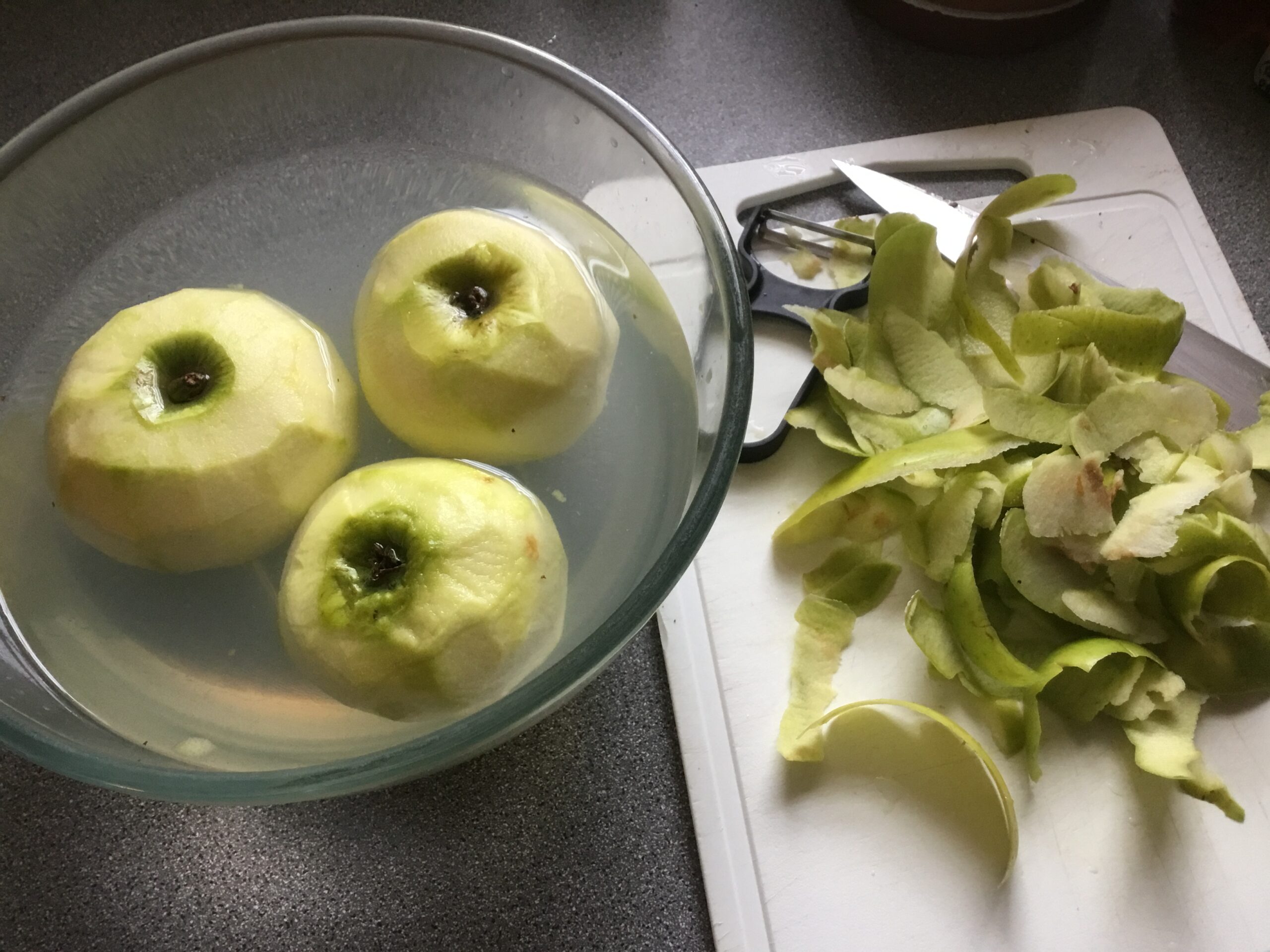 Place in a heavy-bottomed pan and cover with cold water. Heat the water gently until just below boiling, and simmer the apples until they’ve just started to become tender. Be very careful during this part of the process not to let the apple slices go mushy.

When they’ve reached just-tenderness, remove the pan from the heat, carefully drain the apples, and spread them out on a dishtowel or paper towels to cool down and dry.

To another smaller pot, add:

Heat the honey slowly and carefully. Under no circumstances must it be allowed to boil, or its chemical structure will change, and so will its flavor. When it’s gone runny in the pot, and is steaming a little, that’s quite hot enough.  At that point, remove the honey from the heat.

Pack the apples loosely into the jar and pour the honey over them. The apples may demonstrate a tendency to float during this process, so you may need to weigh them down with a spoon or something similar while getting them layered into the jar. They’ll stop floating eventually. 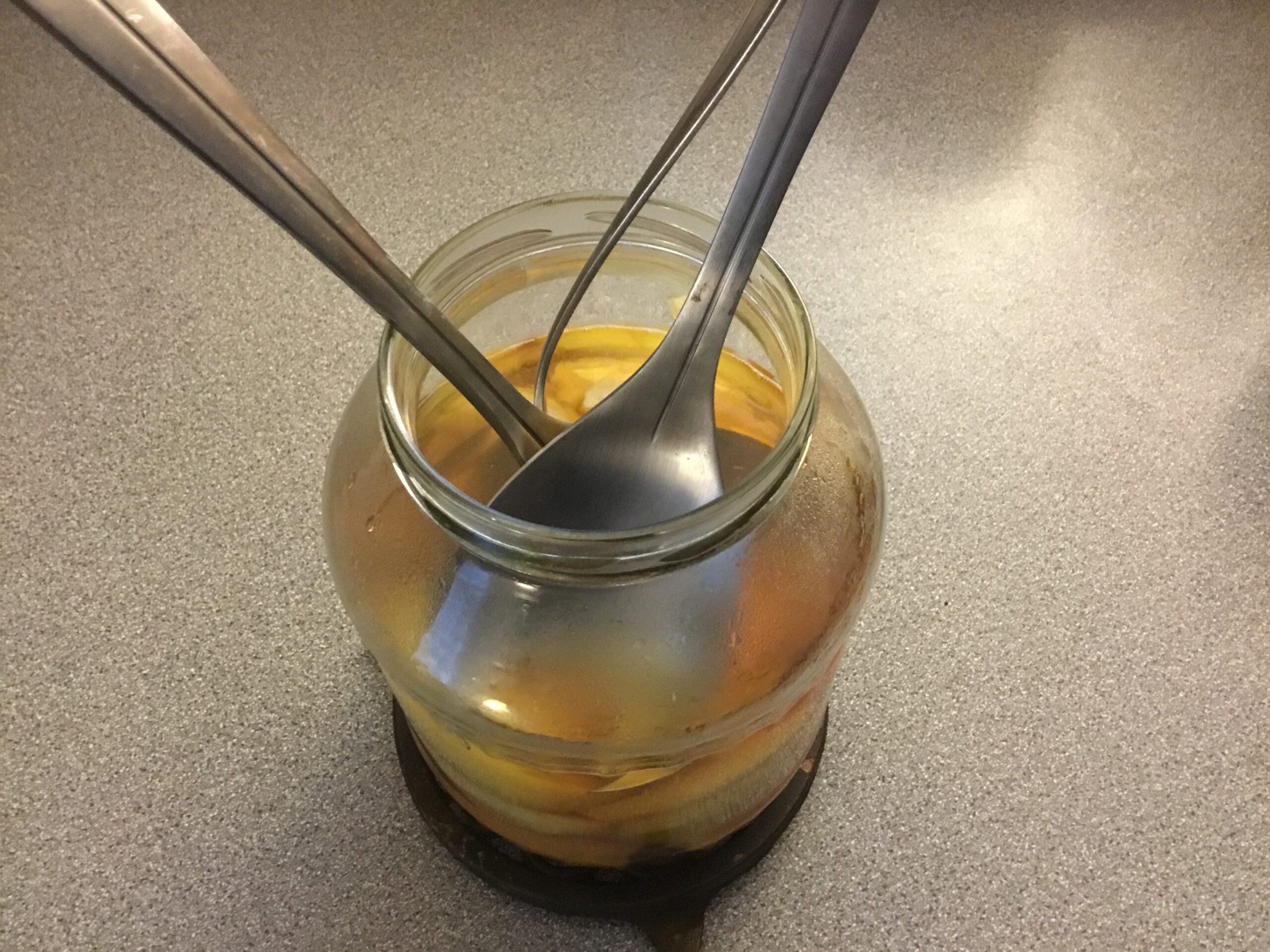 Once they’re all in there, close the jar and put it aside in a cool place for at least two days: three is better. During this period, once a day, turn the jar over a few times in order to move the honey around and keep it mixed with the water that will be coming out of the apples.

After two or three days (or even four—we left ours that long), it’s time to move on to the next step.

Find a broad flat stainless steel or enameled pan. We used a stainless steel frying pan for this. But any wide heavy-bottomed pan that will expose the maximum surface area of boiling fruit and syrup will work. 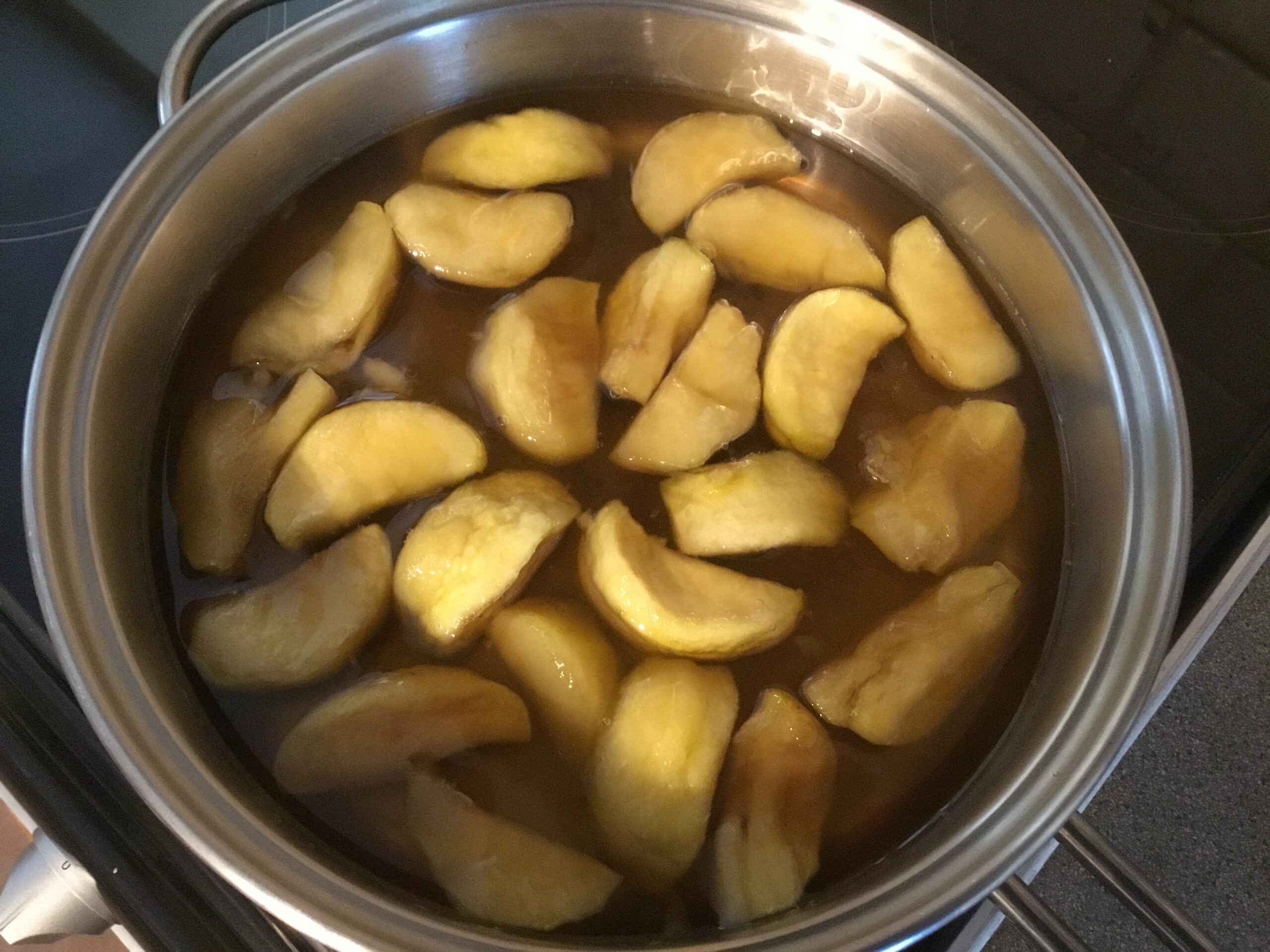 Bring the apples and their syrup very gradually to a boil. Move the apples around as gently as you can during this process so as to keep them from coming apart. (It’s better to move them by shaking and tilting the pan than by using utensils.) Once the syrup and apples have boiled, lower the heat to a simmer and cook slowly and gently until the syrup has reduced to a very thick glaze.

Remove from the heat and allow the apples to cool enough to handle.

Then, to roll them in, have ready:

Also prepare ahead of time: 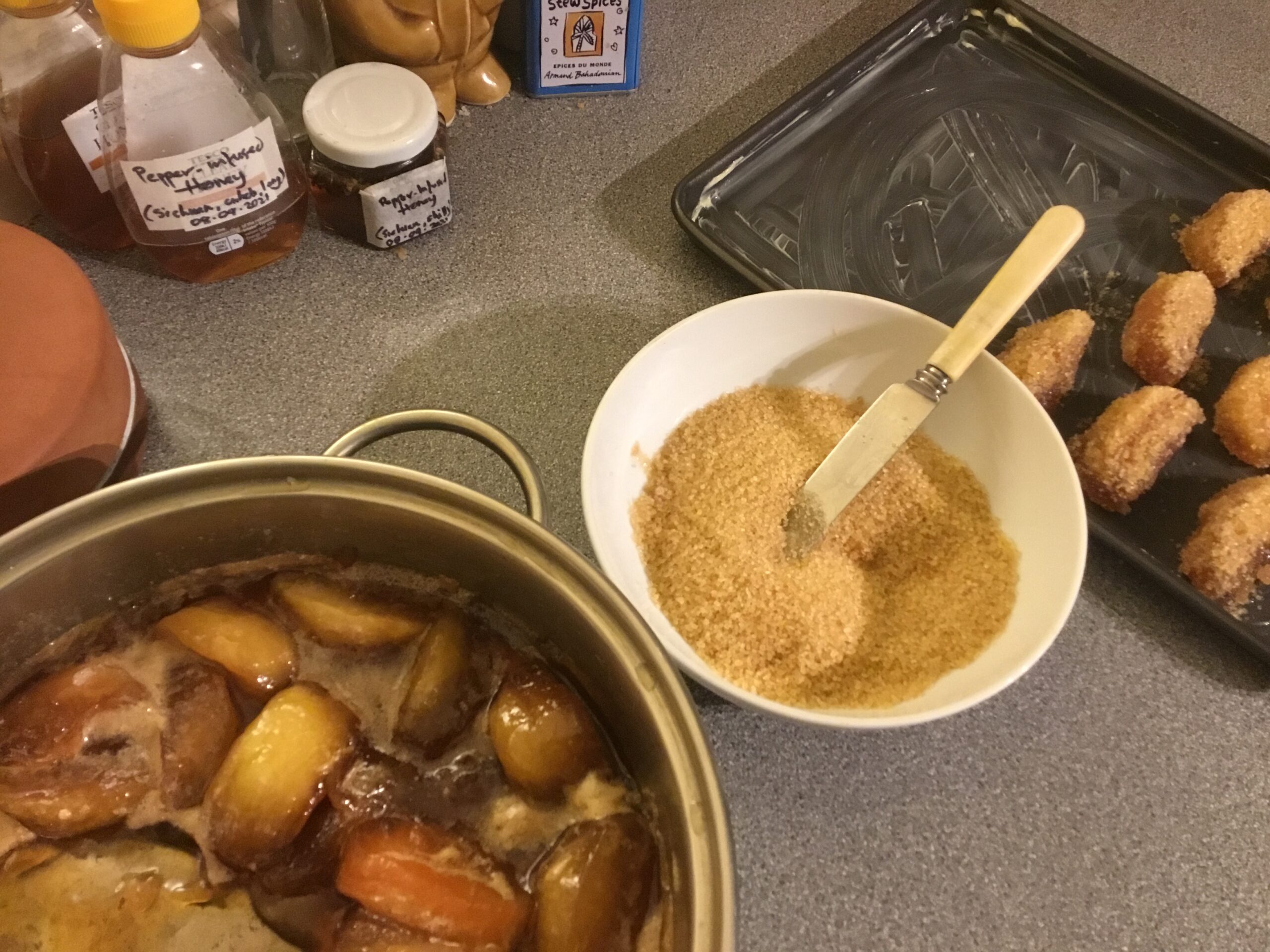 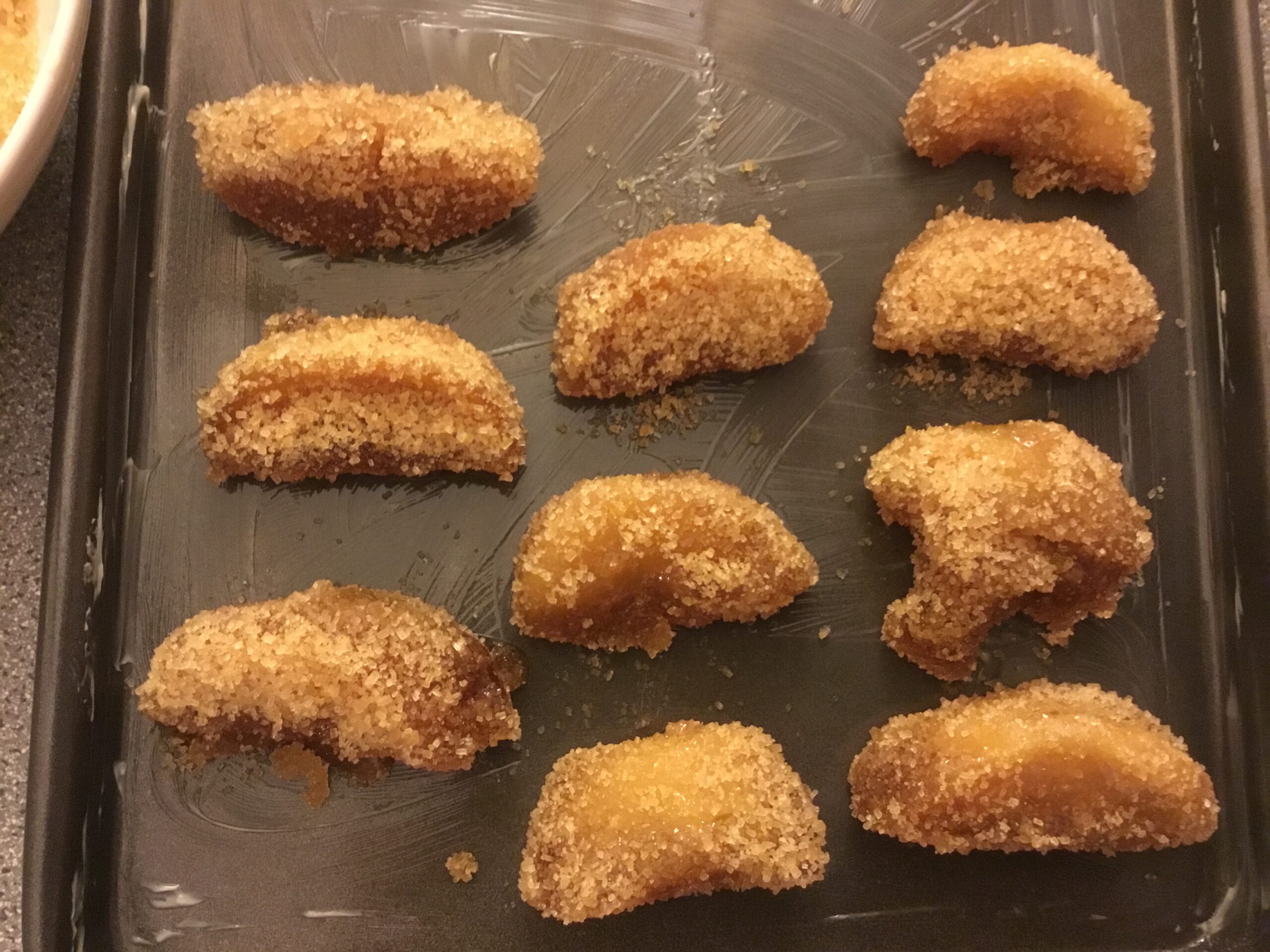 When finished drying, put the apple slices into a container that will close tightly, and store in a cool airy place until wanted. (Or if you’re concerned they might not keep properly in a cool pantry or similar, you can refrigerate them.) These will keep for at least a couple of months… if you can stay away from them for that long.

How to use them? There are any number of possibilities. To use in sweet or savory dishes that normally call for fresh apples as an ingredient, you can substitute these—always being aware that the way the apples have been prepared has removed any tartness from them. Simmer them briefly in water to plump them up first. (Some cooks in those parts of the Realms known for their vintaging might use wine for this instead.)

Apples candied this way also work really well in dessert dishes, due to the concentration of the apple flavor during the candying process. One very successful approach involves chopping them up and adding them to ice cream near the end of the freezing process. They’re also good when added to pies and cakes based on other fruits that might be in better supply.

And they’re very good just on their own. The candied-apple slices can be served simply with a drizzle of the honey used in their making: or with fresh or soured cream and a sweet bread or bun (as pictured here, in a slightly different take on the way Segnbora was served them when visiting with her holders in The Landlady). Or—as wound up happening to about half of ours—they can be eaten plain, all by themselves, just like candy. Just as they are, they tend to vanish with what some might consider alarming speed.

However you choose to eat them: enjoy! 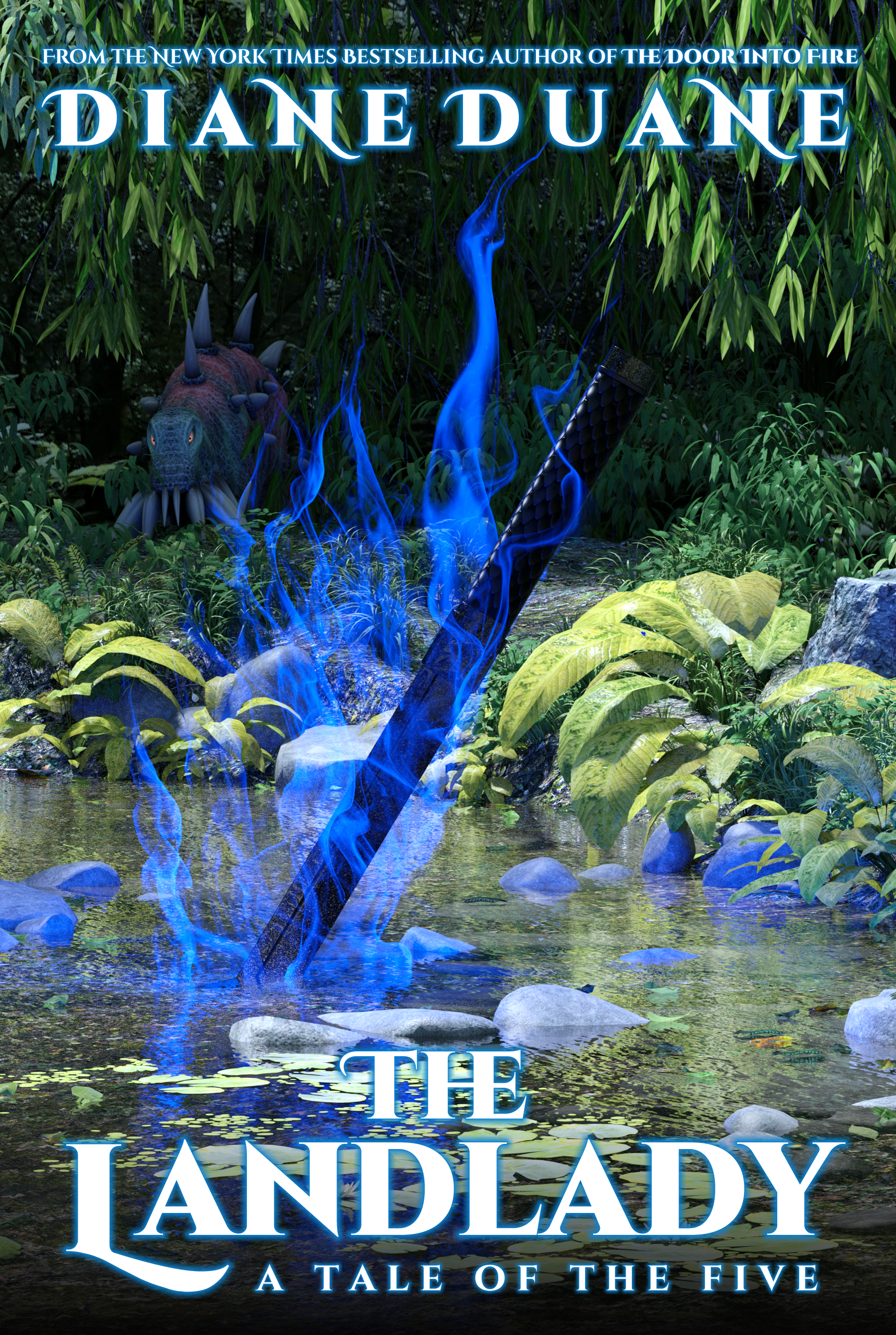 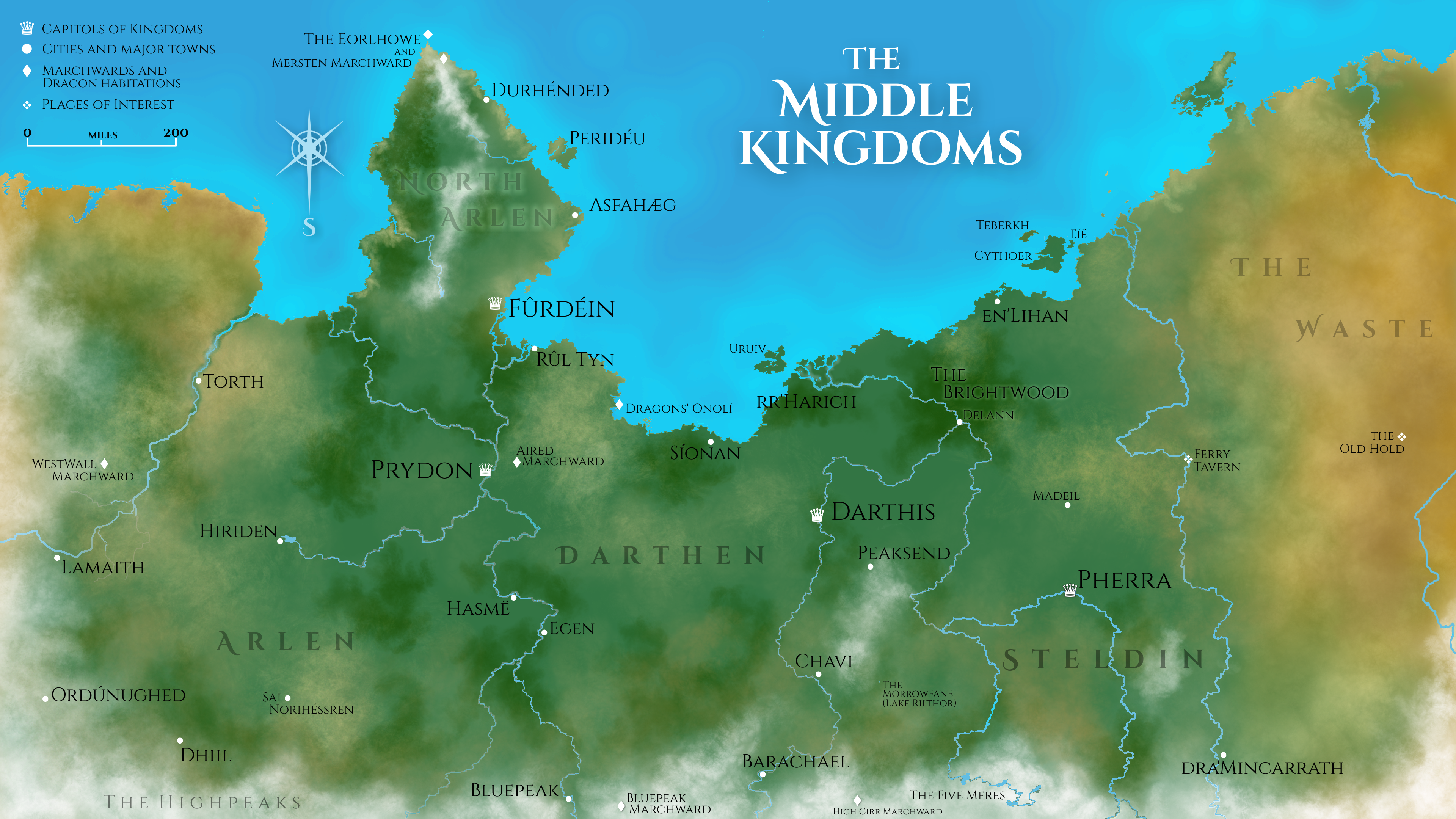