The predominantly agrarian nature of life in the Four Realms means that the beginning of the season of Autumn is the signal for an extended series of food-based celebrations in every kingdom. Usually the most significant of these are tied to the harvest season for a given local crop, so that at festival time the crop’s harvest is either about to begin or has just been successfully completed.

But there are observations less specifically associated with anything but Autumn itself. In these, the focus rests on the season as the gathering-in time for the foods that will keep people alive through well into the next year. In Darthen, this emphasis has for the last six or seven centuries manifested itself in a tradition of setting out, on each day of Autumn, a small (or not so small) collation of favorite local foods for the benefit of any chance visitor or passing traveler.

The tradition seems to have arisen from the widespread sense that the Goddess so loves the world She created that She spends a great deal of time wandering around in it and visiting with Her creation. Should She appear at one’s door—either in Her proper person, or disguised as some known or unknown human being (as She’s routinely felt to be disguised in all of them)—the “Autumn table” (Dar. mentudath) makes it possible to quickly and easily offer Her, or any other visitor, something of the season’s bounty as thanks for Her innumerable gifts. (It’s worth noting that an alternate name for both the collation and the place where it’s laid out is Dar. Aerrudath, “the Lady’s Table.”)

The Autumn table can be quite small, or most lavish, depending on the traditions of the locality and the preferences of the householder—always bearing in mind the question of the resources available to the one who furnishes out the table. Small simple collations are pointedly not adjudged to be in any way lesser than large abundant ones… as the Lady is known to particularly favor the tables of those who offer their guests what they can, even though they can spare very little. Indeed in some parts of Darthen (and the just-across-the-border parts of Arlen that share the tradition), the last-night-of-Autumn collation is traditionally the smallest—sometimes consisting of nothing but bread to eat and wine (or milk or water) to drink. This is meant purposefully as a reminder of the unpredictability that can attend on harvests in any year or place, and the necessity of being as generous as possible to one’s neighbors should they find themselves facing hunger at the end of a bad season, or during the long winter that follows.

An Autumn table of the more lavish and less rural type makes an appearance in The Door Into Sunset, in the Darthene embassy in Prydon. There the Darthene Ambassador to Arlen, Andaethen d’Telha tai-Palaiher—second cousin and foster-sister to Freelorn’s longtime friend and follower Moris—is found sitting up late doing paperwork at one end of the Embassy’s Autumn table. Moris and Herewiss having turned up earlier on the business of delivering a declaration of war to the then-current Arlene leadership, Andaethen invites them to get something to eat from what’s on offer.

She points out—as one of a goodly number of dishes making up that evening’s version of the collation—some “roast chickens stuffed with garlic.” No comment passes about these at the time beyond Andaethen’s rather laconic remark that the one she’s just demolished was “good.” But an interested visitor might with some reason inquire what so rustic a dish was doing on an ambassador’s sideboard.

In this case the cause for the slight food-snobbery wouldn’t be anything to do with the garlic, but rather the presentation (in such fancy surroundings, where a guest might rightly expect more of the kitchen) of a very non-composed kind of dish, very countrified… just the kind of thing to shove into a communal bake-oven to roast slowly in the heat left over from the oven’s last fueling for bread. In this particular case, it seems a safe bet that the dish was a favorite of Andaethen’s—as a daughter of a south Darthene farming family—and one she had no intention of giving up just because these days she lives in town.

Probably the most interesting aspect of this approach is the stuffing of the chicken under the skin but not in the body cavity. This technique works particularly well for leaner birds, poultry too small to stuff inside the body, and for chickens that might wind up being subjected to longer roasting times. The stuffing held against the bird acts somewhat like insulation, keeping the breast meat underneath from drying out (and additionally releasing onto it, during the roasting process, whatever butter or other fat has been added to the stuffing mixture). Any flavorings added to the stuffing will also baste themselves into the chicken as it cooks, lending it their own aromas. And as a final positive, for those who love crunchy chicken skin, this approach pretty much makes that unavoidable.

This recipe could be split across a couple of chickens if they were small enough (as Andathen’s seems to have been). But the amounts in our recipe are meant to suit a single chicken of about 2kg / 4 pounds.

To do this, start by rubbing off any excess “garlic paper” from the outside of the garlic heads, leaving only the skins of the cloves themselves intact / unpeeled. Preheat the oven to 400ºF / 200ºC.

Cut across the tops of the garlic heads and place them in small ovenproof dishes.

Drizzle the garlic cloves with olive oil (or duck fat if  by chance you’ve got some), salt and pepper them, and wrap their containers in aluminum foil. Bake them in the preheated oven for 35-40 minutes. Squeeze one head to test: they should be soft, and should “give” when squeezed. Remove, unwrap, and allow to cool.*

Now begins the preparation of the stuffing proper. Heat up your grill/broiler (or fire up your toaster or toaster oven) and toast three good thick slices of bread; then allow them to cool. 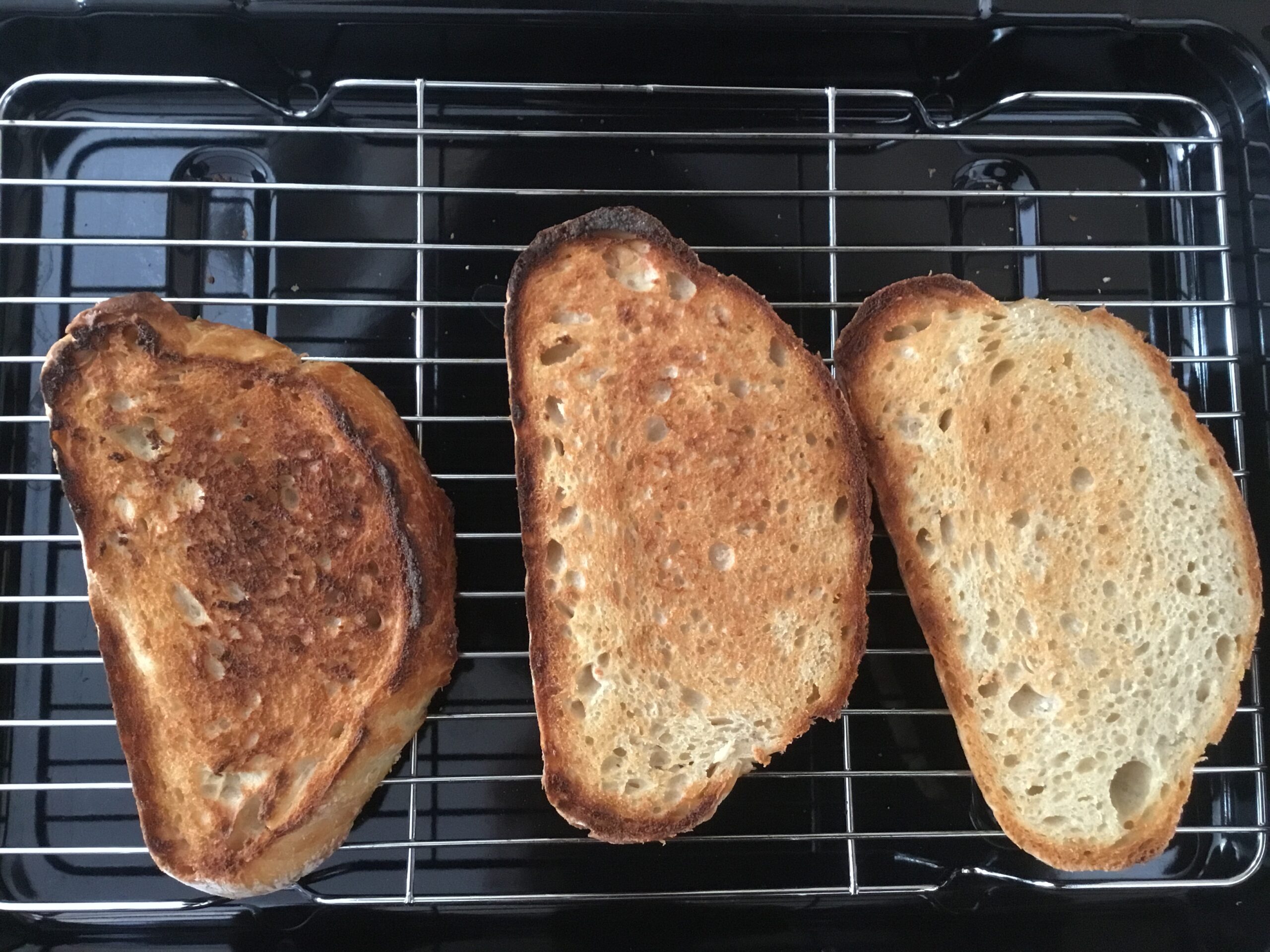 Once they’re cooled, cut them into cubes of between 1/2 inch and 1 inch on a side. (An assortment of both sizes is just fine.) 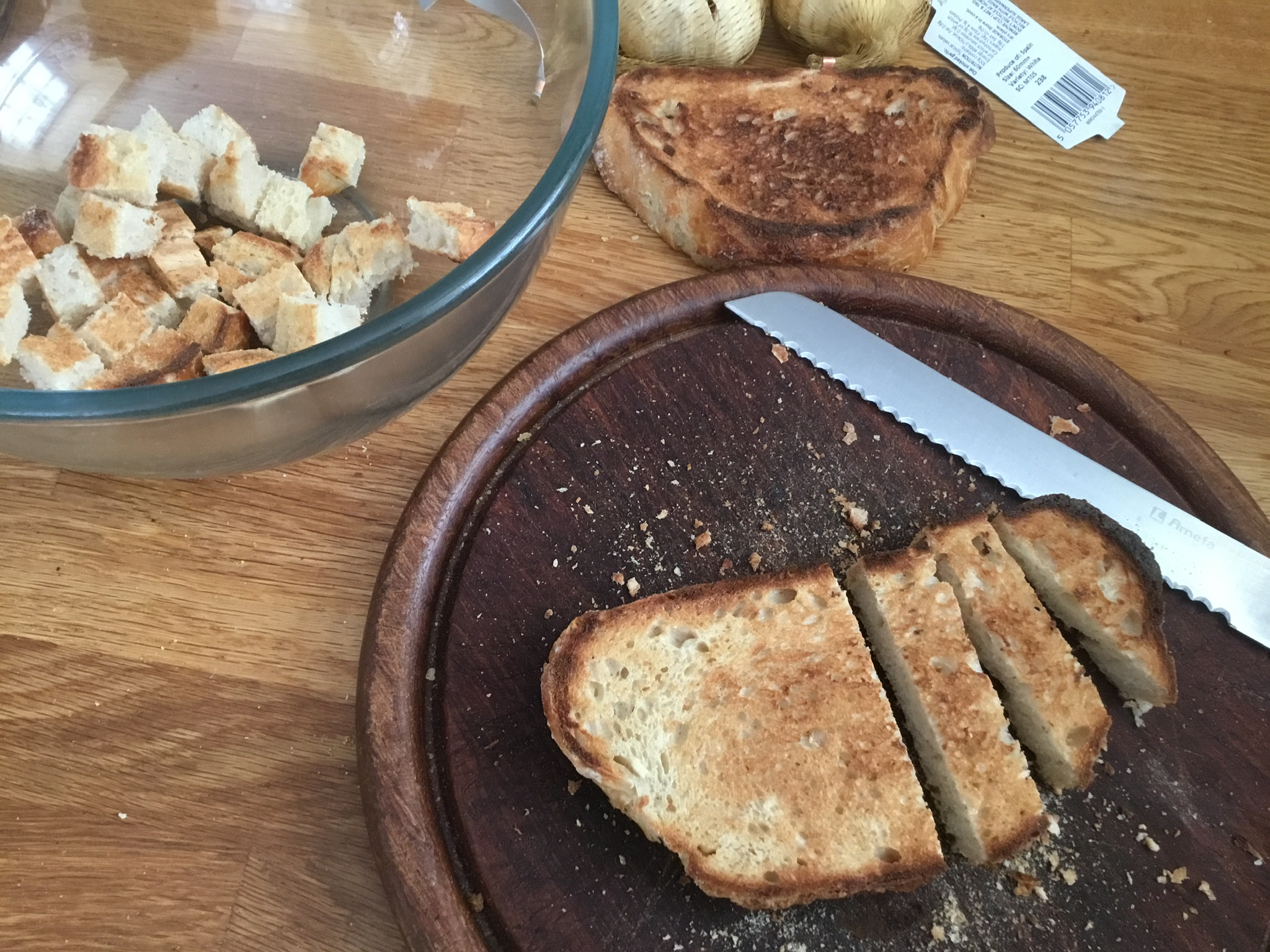 Throw the bread cubes into a bowl large enough for the addition of more ingredients and vigorous mixing.

Assuming that the roasted garlic heads have now cooled completely, use a blunt-ended knife (or similar piece of equipment) to remove the cloves from their outer skins. Once they’re all removed, add them to the cubed bread. 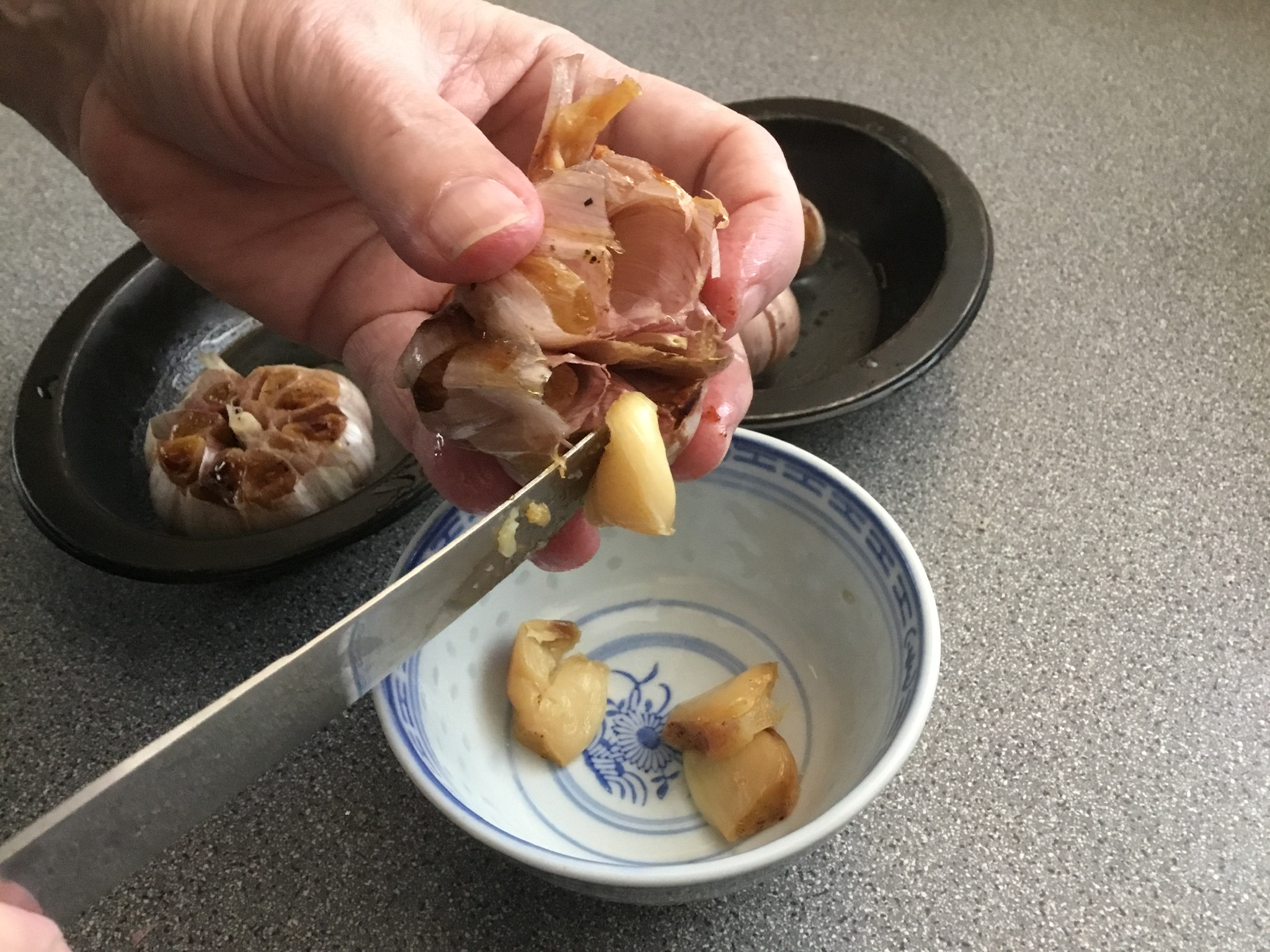 If you’ve opted to add fresh garlic to this stuffing as well, break them out of their heads and peel them. (This is the point at which you decide whether to allow the roasting process to cook them, or whether you want to add them to the shortly-to-be-chopped onion which will shortly be sautéed. This is entirely a matter of personal taste. If you like a sharper, more immediate garlic flavor, don’t sauté them: just chop them up and throw them in with the stuffing mix at this point. …Note: this is also a great way to use slightly superannuated garlic that’s showing any pre-sprouting in the clove, as ours was.) 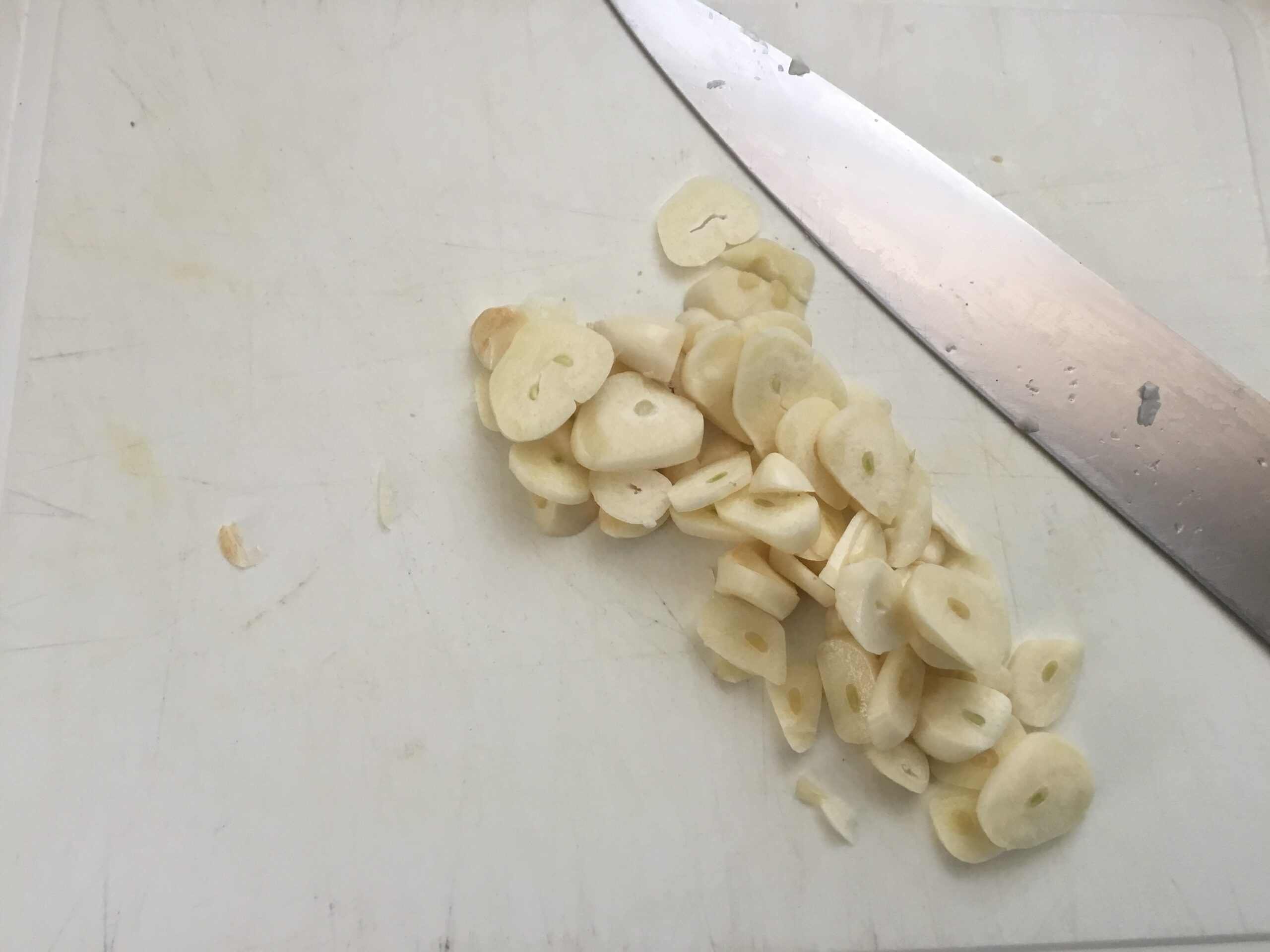 You’re going to be adding several tablespoons of butter to the stuffing, so this is a good time to melt it. You might like to let the butter pick up a little extra flavor from the garlic, either roasted or fresh, by pouring it over them and letting them sit for fifteen minutes or so… 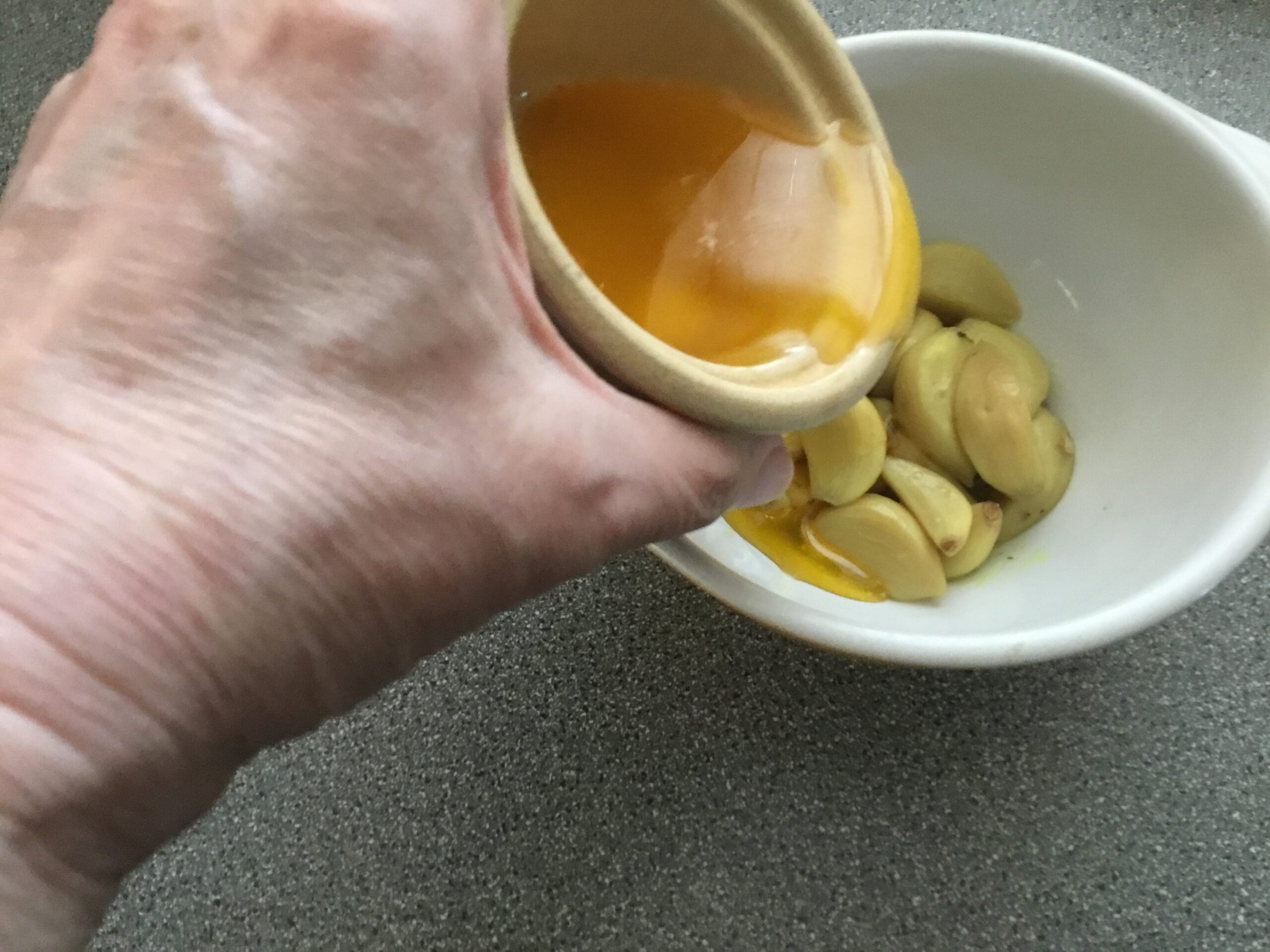 …while you peel, chop and sauté the onions. To the sautéeing pan, add at least half of the dry seasonings you’re going to be adding to the stuffing. The sautéeing will intensify their flavor for release in the beginning stages of roasting: the un-sautéed herbs will release their fragrance more slowly. 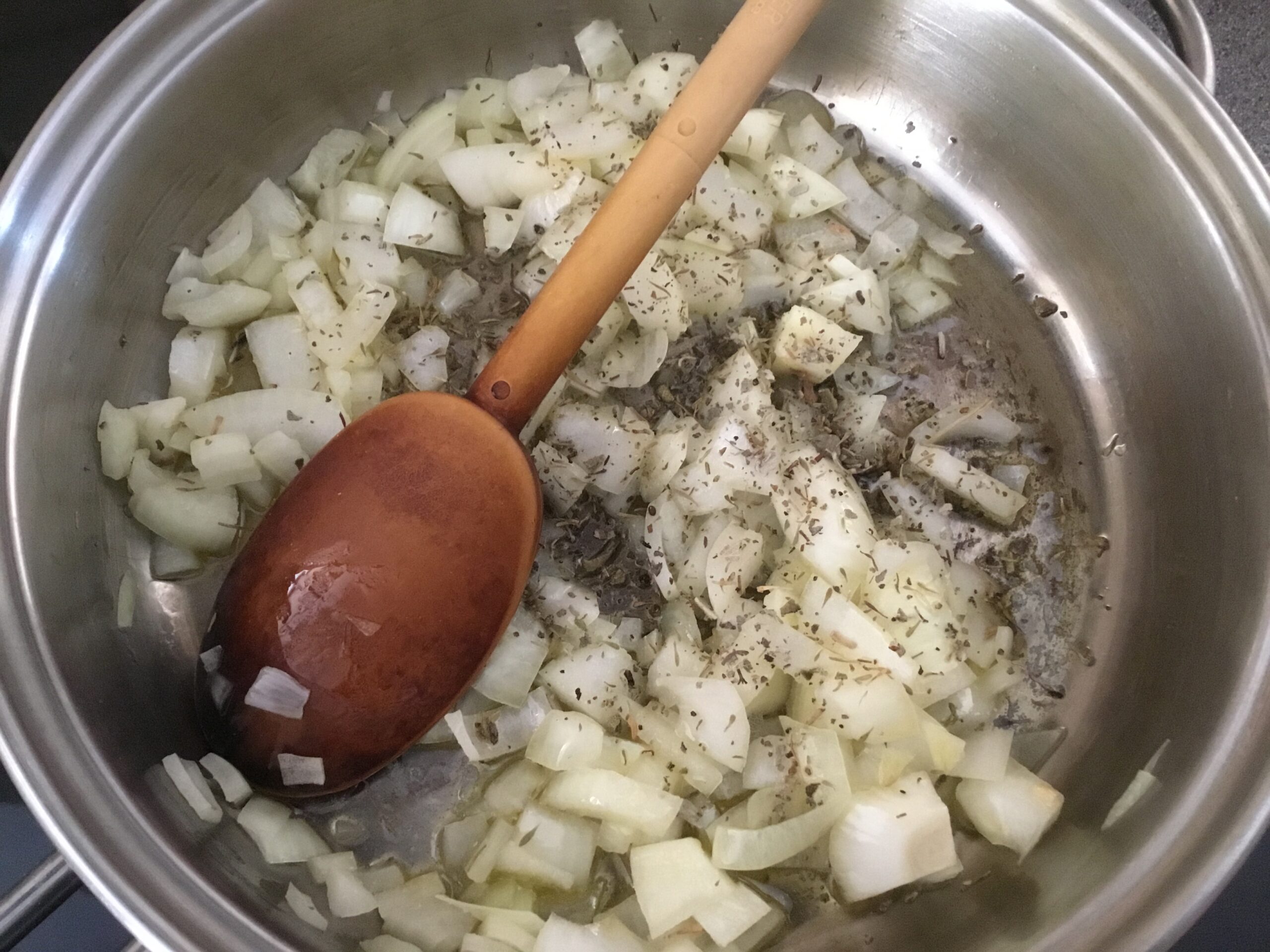 When the onions have gone translucent, add them and all the garlic to the stuffing, and toss it all well. 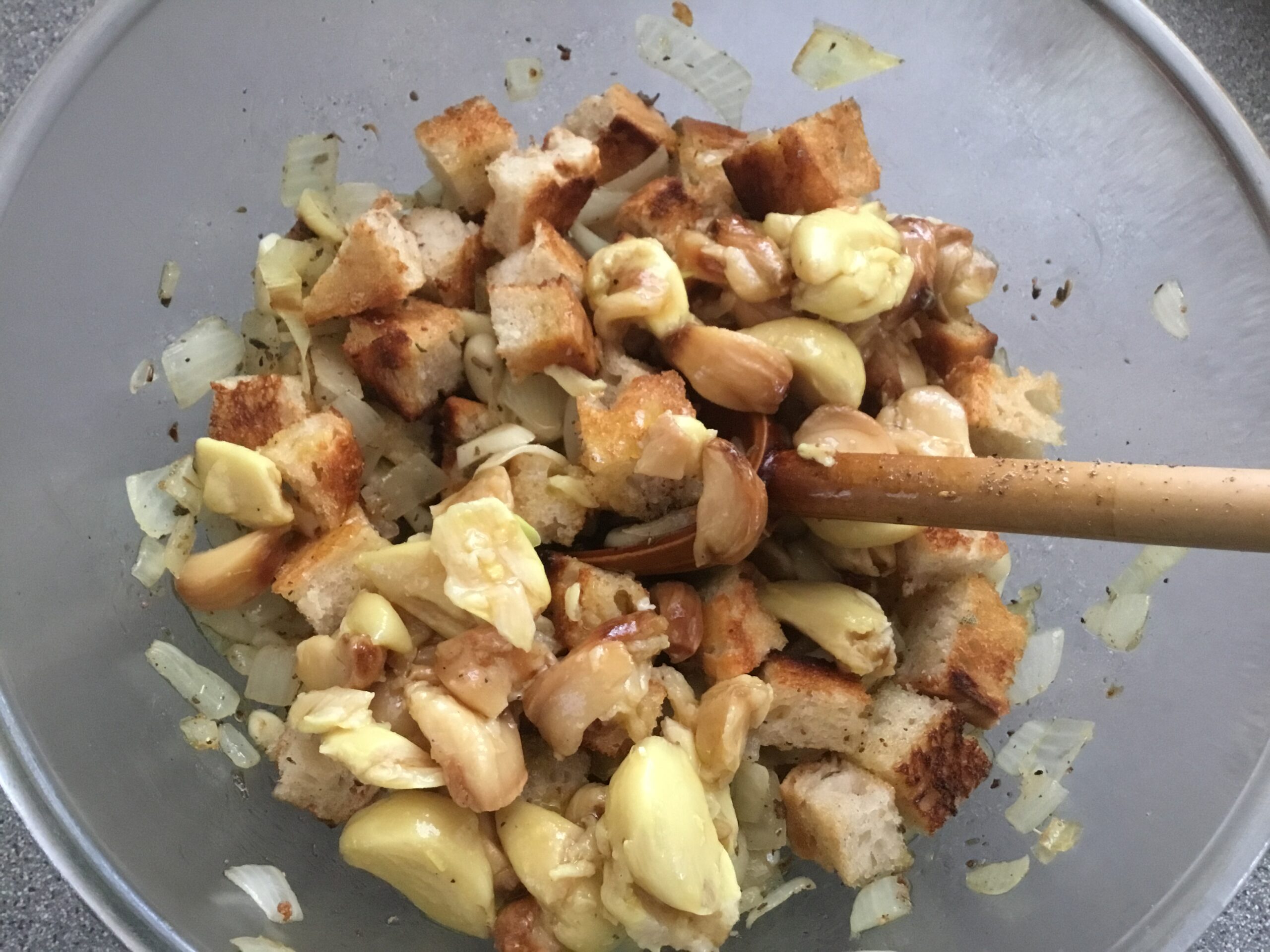 …Now it’s time to stuff the chicken. To do this in the typical Darthene manner, you need to separate the skin over the chicken’s breasts from the breast meat proper. This simply involves sliding your hand under the skin at the neck flap and pushing downward and backward along the chicken’s breastbone, breaking the connection between the under-skin “fascia” layer and the breasts proper.

Once you’ve done this separation process, you can now stuff the chicken under the skin. After getting a handful of stuffing inside, push in a couple of the cubes of chilled butter. Then push in another handful of stuffing, and more of the butter, alternating each until they’re used up.

If you’ve never done this kind of stuffing before, the following video should be of some assistance.

…When you’re finished stuffing the chicken, it’s time to get it ready to roast. Preheat your oven to 200ºC / 400ºF and dig out your preferred roasting container. (If you don’t have a dedicated roaster-type utensil like this one, a deep (ideally, lidded) casserole will do just as well. You’ll be wanting to seal it with foil if the lid won’t close with the chicken inside.)

Peel the remaining onion, chop it in half, and use it to prop up the chicken. This will flavor the gravy nicely without being too assertive. Once the chicken is in place, drizzle a little vegetable oil or olive oil on top of it, rub it in well all over the stuffed breast skin and the legs, and season it with your preferred dried herbs and a few grinds of coarse-ground salt and pepper. You can also  close up the cavity if you like with a peeled small onion. Finally, to keep everything tidy, you may want to tie the legs together with twine.

Close up your roaster (or cover your casserole with foil) and put the chicken in the oven on a middle shelf. After about ten minutes at 400F/200C, lower the oven temperature to 375F/180C.

Roast the chicken at this temperature for 45 minutes. Then open the roaster or lift the foil to baste the chicken once with whatever juices have come out. When you’re done basting, cover/seal the chicken up again and roast it for another 45 minutes — for a total of an hour and a half. Then uncover and allow to brown for another 15-20 minutes.

When all the cooking’s done, remove the chicken to a carving board or a large dish and allow it to rest for at least 15-20 minutes before carving. You can use this time to make a simple gravy using the roasting juices.

*It would be counterproductive at this point to toast some of that nice pain de campagne under the grill, squeeze the roasted garlic out onto it, spread it all over the bread, and have that as a snack with a glass or so of a nice white wine. If you did that, you’d just have to roast more garlic. So don’t do that. 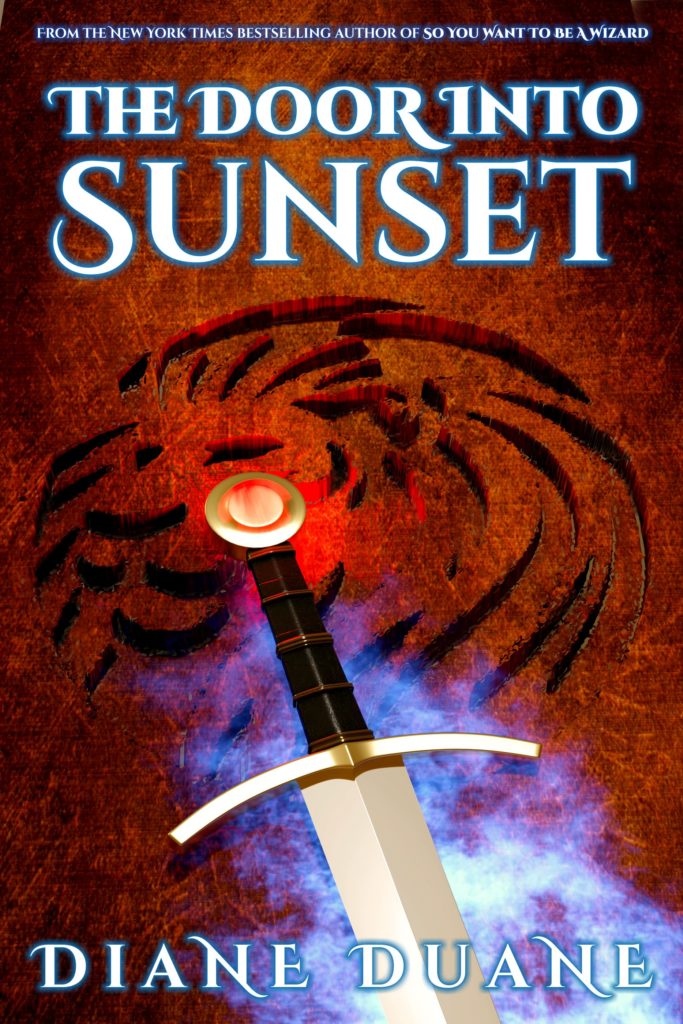