There are many places in the Kingdoms where (for reasons of terrain or climate) wheat won’t grow, or doesn’t grow well. In such places, the breadmaking part of life tends to revolve around either oats or rye, with the oat having a slight advantage due to being slightly less difficult to work with.

The species of oats best known and most widely grown across the Four Realms is a variant of Avena abyssinica, the so-called “red oat”, though Avena sativa (our common oat) is also commonly grown in the southern parts of the Kingdoms, where the cooler climate favors that species and produces higher yields. (A. abyssinica, which prefers warmer conditions, is more popular with farmers in the Darthene and Arlene midlands, and in the southern parts of North Arlen near the Lesser Arlid watershed.) Where local climate makes it feasible, both species are routinely grown as companion crops to both wheat and rye.

Across the Kingdoms, oats (both cracked and soaked, or ground for flour) are widely used as an addition to yeast-raised wheat or rye breads. Equally popular, though, are breads based on oats only. One popular treatment is what we would think of as a flatbread or wrap made (in its simplest form) using fine-ground oat flour, a liquid—usually milk, though sometimes beer or just water—and eggs. This is usually made in a flavor-neutral form, without any significant seasoning except a little salt, so that it can be used to wrap around either savory or sweet contents. (Or sometimes both at once. Many regions around the Kingdoms do seem to mirror the Earth-European medieval fondness for combining sweet and savory elements in the same dish. In such places those who insist on separation of the two flavoring styles are variously seen as either seriously unsophisticated, or a little too persnickety for their own good.)

These are the breads provided in The Door Into Shadow as an accompaniment to the dinner of “aggressively garlicked lamb and buttered turnips” served to Freelorn and his people at the Yale and Fetlock tavern in Chavi while they’re masquerading as traveling players. The commonly-used Darthene name for these flatbreads, hinwéniv, maps very closely onto the Celtic and Old English term bannuc (“bannock”) due to its roots in a very old Darthene word (hiánwë) for something dropped or poured (from a ladle or pitcher) onto a bakestone. But for the modern this-Earth consumer, “bannock” is presently a whole lot more likely to make someone think of a soda-raised Australian pot bread, an Indigenous fry bread variant, or something Scottish they heard about while watching Outlander.

As a result, when hunting for a colloquial English-language word for these, it seems safer to turn to the mid- and south-Darthene dialect word shessanuen, which translates as “platebread.” The reference is to the kind of baking done on an iron baking round hung by a handle over the fire, or rested on a trivet over the embers. (The name for the wrap itself comes of a punning connection between the Darthene anu-/“iron” root word and OD annen, “bread”.)

These are easy to make, versatile as a wrap for all kinds of things, and also (for those who’re avoiding it) gluten-free. Assuming you don’t have a dedicated griddle or bakestone, you’ll need a heavy frying pan to bake them on.

To start with: If you have trouble sourcing fine-ground oat flour, but do have access to a coffee grinder, you can use that to grind down either flaked (oatmeal-style) oats or pinhead (porridge) oats until you have enough flour to make up 230g/2.5 cups. (This can also be done in a Cuisinart/Magimix using the steel blade, though pinhead oats don’t work so well for this: if using a Cuisinart, stick to flaked oats. They’ll probably need twice as much processing time as would have been needed if using a coffee grinder.)

Once you have your flour: in a medium-sized mixing bowl, mix the oat flour and salt together. Beat the eggs into the milk, and then the liquid/melted fat, and add this mixture to the flour. Stir well until you have a thick batter with a consistency somewhat thicker than heavy cream. You’re after something that will spread readily on the griddle or in the frying pan, without running uncontrollably all over the place. Add more milk in small amounts if necessary. (If you start baking these and find the mixture too wet, beat in more oat flour until it behaves itself.) When mixed, pour the batter into a jug from which you can pour it onto the griddle.

At this point you could take a break, if you liked, as the consistency of the batter (and its performance in baking) is improved if you can allow it to sit for a couple of hours. This isn’t strictly necessary, though. Fifteen or twenty minutes will do if you’re in a hurry.

When you’re ready to go: Have ready a plate with a paper towel on it, to stack the finished flatbreads on. Heat the griddle or frying pan to a medium heat, and grease it with half a teaspoon or so of your preferred fat or oil. Then quickly pour a slug of the batter into the center of the frying pan or onto the griddle with an outward-spiraling motion. (If it’s convenient for you and you’re using a frying pan, you can pick it up and swirl the batter out a little thinner if you like.)

Bake the flatbread for three or four minutes, until it’s evenly browned. Then carefully lift it and bake it on the other side. Note that these are significantly more fragile than pancakes based on wheat flour. If the batter’s not thick enough, or the flatbread is too wide, or both, they will try to crack and/or break apart when being turned. The optimum size for these is about that of a large saucer or small serving plate—18-24cm, or sort of 7” to 9”. Much bigger than that and you’re going to wind up having to turn these with two spatulas to keep them in one piece… which may be more excitement than you were planning for.

Remove the finished flatbread to the stacking plate, let the griddle or frying pan come up to your optimum temperature again, grease it once more, and repeat the swirling/pouring/turning-when-ready process until all the batter is used up. (A good piece of advice at this point would be to wash the pouring jug immediately, as oat batter turns into something unnervingly like concrete if allowed to dry onto dishes.) …Allow the platebreads to rest and cool for at least half an hour or so before eating them. Three or four hours is better, as the longer they can sit, the more flexible and manageable they’ll become.

Platebreads are often casually eaten unfilled, the way one might eat a flour or soft corn tortilla in a hurry: simply buttered and folded or rolled up. But they’re at their best with a filling. Cheeses, especially soft fresh or “green” cheeses, are popular. So are cured-and-pulled or potted meats and fish, in combination with vegetables cooked or raw. (Our image above shows platebreads [on the left-hand plate] ready for rolling after being filled with flaked smoked mackerel and smoked salmon, both with sour cream; and also paired with slices of aged Cheddar and Cashel Blue cheeses. On the right-hand plate there’s a strip of platebread wrapped around a chunk of honeycomb, and another whole one filled with raspberries tossed in Demerara sugar* and unsweetened thick cream.)

Various market stalls in the Kingdoms’ larger cities, and cartmongers in smaller towns, routinely sell filled platebreads as street food. Additionally, in the capitals and some larger towns one can find cookshops that specialize in them, just as one can find crêperies in our world, in areas where there’s regional interest or a significant migrated population from a region of one of the other Realms where these are the “majority” everyday bread.

You may also prefer another approach, in which these are treated as an open-face bread—ingredients being placed on top of them, and the whole business then slid into a baking oven or passed under a salamander. (Below you can see Peter’s take on this, in which he’s combined slices of Silesian sausage, Cheddar cheese and Stilton cheese on an oat platebread, and then run it under the grill.) 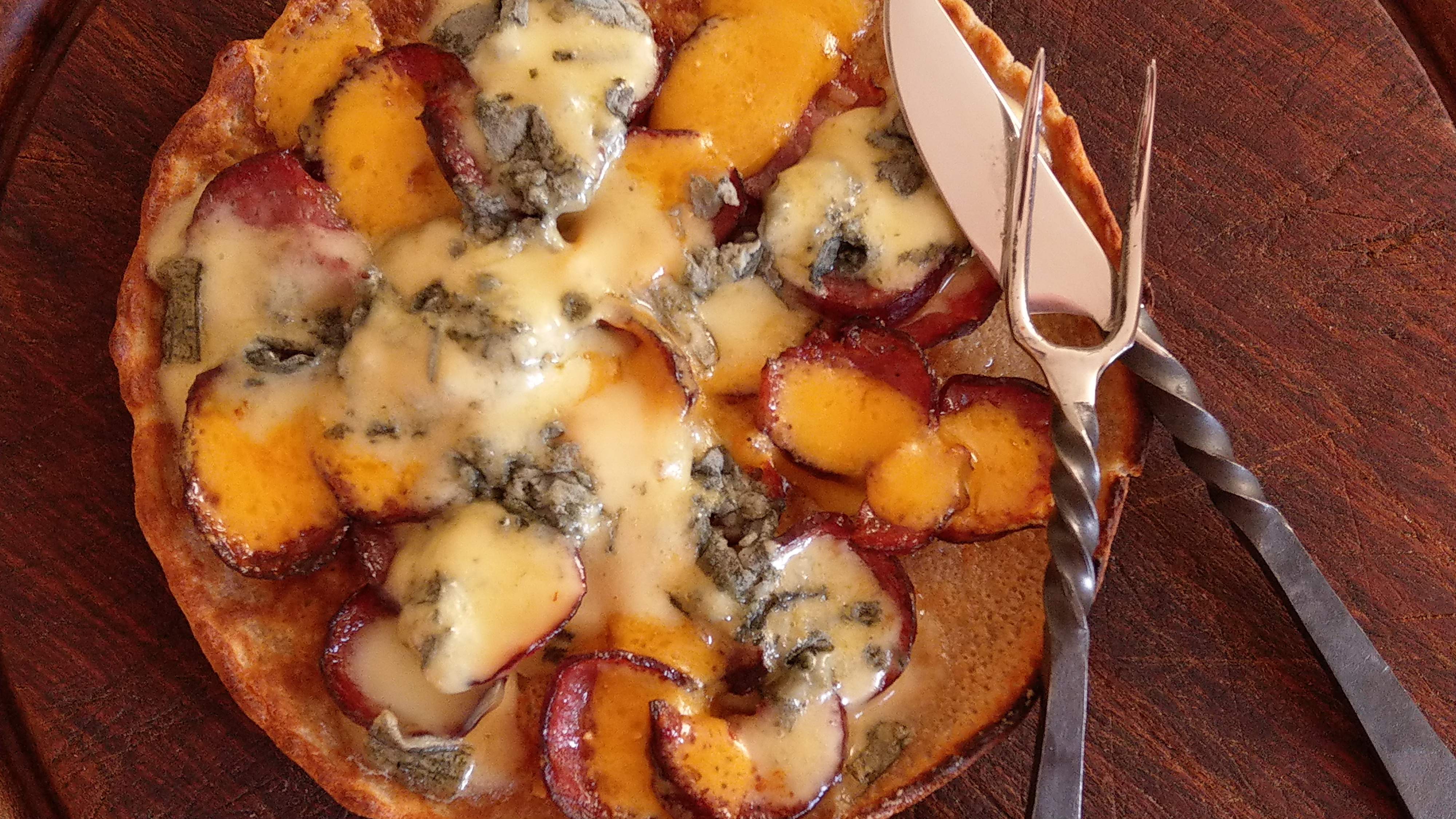 A final thought in passing: The similarity of this treatment to that of one traditional style of Earth-European crêpes could well make a curious tourist to the Kingdoms ask, “Has anyone tried this with buckwheat?” This could cause some raised eyebrows, as although Fagopyrum esculentum is known there, not many people really think of it as food. In most areas with a lot of arable land, buckwheat is used almost exclusively as a “green manure” crop—sown in late summer or early autumn along with red and white clovers (Trifolium pratense sp.) and “grazing rye” (Secale cereale), and plowed in at the growing season’s end to fertilize land presently lying fallow between crops. …But also, in some very southerly areas there seems to be a distant memory of buckwheat as a “you-eat-it-when-you’ve-got-no-choice” food associated with ancient crop failures or the old bad times when the effects of the Dark were still receding… so that people tend to think of the grain with a vague sense of distaste or disdain. The only region that seems to have escaped this attitude is southeastern Arlen, and why this should be so is anybody’s guess.

*The sugar at first glance may seem unorthodox, but a variant of Saccharum phragmitus, our sugar cane, grows all up and down the eastern North Arlene coastline and around the mouths of the Darst. The crystals of the boiled sap of mitenthë (“honey-rush”) are regarded as something of a specialty sweetener—a curiosity that’s not to everybody’s taste, not least because it’s so labor-intensive to produce, and thus fairly expensive compared to honey.